Film Quick Pick: "Everything Is" Great at Cinefamily's Fest 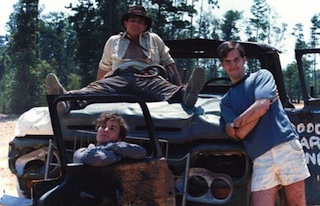 Raiders of the Lost Ark: The Adaptation
Instead of our weekly Film Calendar today we're giving you a single quick pick: Cinefamily's Everything Is Festival 2011.

I was lucky enough to see the Raiders of the Lost Ark adaptation a couple years ago at the Mann Chinese Theatre (hosted by Eli Roth, of all people), and it's amazing. It's easy to make fun of these old weird movies, but the one thing these amateur filmmakers & found footage collectors have in spades is love for the movies. And that's only one of the films screening at this weekend-long event; it screens Sunday, July 3 at Noon.

For those unfamiliar, Everything Is Terrible is an absurdist performance art group that digitally archives these forgotten gems, both for their (unintentionally) comedic & time capsule value. (Read our coverage of the first "Everything Is Festival!" event at Cinefamily from last year.)

If you prefer "so good it's good" to "so bad it's good," then you'll be pleased as punch to learn Cinefamily merged Everything Is Festival with their annual Comedy Festival. This means there are contributions from Conan O'Brien's writing staff, Neil Hamburger, Dan Harmon & more.

Everything Is Festival! trailer (Incubus) from Cinefamily on Vimeo.

Cinefamily's "Everything Is Festival 2011" runs Thursday, June 30th - Monday, July 4th. An EIF! Festival Pass is $90 (You've got one more day to get the pass; when the fest begins they will not sell any more passes.) Tickets to individual shows are $10-$14. The full schedule is here.