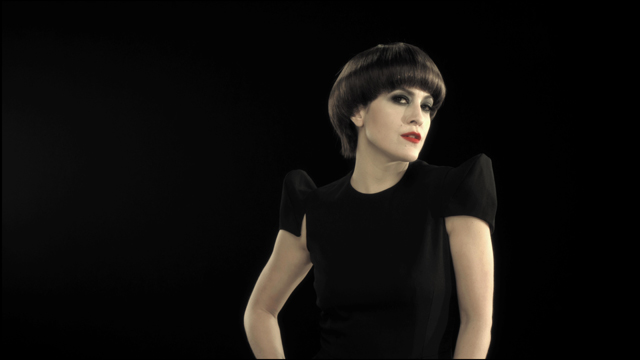 With the release of her sixth solo album, 101, Keren Ann uses her deft sound-weaving skills to give the listener a glimpse into the lives of others. This is film noir folk-pop that sticks with you long after the music has stopped. Although she has also released French material in the past, this all-English record proves that her voice is hypnotic no matter which language she chooses.

Over the years, Keren Ann, whose last name is Zeidel, has honed her atmospheric sound in recording studios around the world. This globetrotting fits perfectly with her background, given that she's of Javanese-Dutch/Russian-Israeli descent, speaks multiple languages and splits her time living in Paris, New York City and Tel Aviv. This week she's performing in Los Angeles—McCabe's tonight and the Luckman Fine Arts Center tomorrow night. LAist caught up with her last week to talk about the new album, tattoos and her forthcoming gothic opera.

LAist: "My Name Is Trouble" is such a great way to start the album. Is there a story behind that song?

Keren Ann: I think that at some point in all of our lives, we're someone's mess or someone's trouble. We enter their life with a big bag of the past—past problems and past loves. I've had someone like that come into my life, and I'm sure I've been that person for someone else!

This album really does seem to give glimpses into many different windows. How did you come up with that concept?

I think that when you make a record, even if you're not planning to do a concept record, all of the songs are linked because they usually reflect the same time period or musical chapter you're in. So these windows just reflect a certain time in my life, and the stories I wanted to tell.

Many of the "characters" featured throughout the album are flawed but intriguing...

I love how certain songwriters and novelists write about people who aren't instantly lovable, but you fall in love with them through their story. I often try to make that happen through my lyrics.

A writer like Bob Dylan or Bruce Springsteen can write a song about someone—and it may be about someone I actually know or an acquaintance who fits the song's description—and although I don't connect as well with them in person, through the music and the way the song is written, I completely fall in love with the character.

For me, it starts with sound. I usually make an album I feel like listening to at the time. I only write about what I know and what I've lived. For me, a story doesn't work if it's not honest—at least in terms of the emotion if not the specifics of the story.

Over time, the songs become closer to what I want to hear. I usually want to create an atmosphere that will give enough information about the song through the sound, so it's not limited to the lyrics or the melody. It's a whole.

In your bio, the title of "Sound Designer" comes before everything else. As you were in the studio, did you have any sound-related happy accidents while recording, or perhaps a new technique you tried out?

Absolutely. I've always liked to explore recording the piano with different compressions, and doing things like removing the attack of the chord and taking the sustain. Usually I know exactly what I want to hear, then I imagine how to get there. If it doesn't work like it does in my mind, then I try to go elsewhere.

I think that my studio work is very different from my stage work, because for me, the studio is like a laboratory—a place to experiment as I paint with and blend sounds. Even the technical part is completely artistic, and I take every step very seriously while still having fun with it. 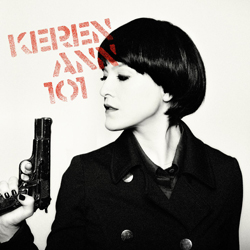 Keren Ann's new album, '101'
How do your live performances differ from the music you make in the studio?

When I'm on stage, I try to do something more raw, temporary and ephemeral—messier with more of a rock edge. To put it another way, I think of the studio as haute couture and the stage as prêt-à-porter.

When I'm in the studio, the music is very intimate and personal. When I'm on stage, I have to fill a room with frequencies and notes. The two situations have different outcomes, but for me it's important to have both because it gives me balance.

You recorded this album in France, Israel, and Iceland. Does where you record have a major impact on the final sound?

Sometimes but not always. It's more for the sake of convenience. If I'm traveling and feel like recording, I'll just jump in a nearby studio. I'm always happy to explore new spaces. If I walk into a studio that's made out of wood and looks like a sauna, then I'm going to be intrigued and want to record there to see what the outcome is.

If I have limited time to finish something on an album, then I'll choose a familiar place—such as the studio I use in Paris—because I know the gear and I know how to work there. But I also enjoy the chance to explore.

The song "Sugar Mama" has a wonderful playfulness to it. What inspired you to use that "Wipe Out" guitar lick in the middle of the song?

I thought my character in this song was a little Hollywood-based, so I needed to get that surfboard sound in there.

You spent some time in California a while back when you were studying oceanography. Have a number of your songs been inspired by this state?

On this new record, the track "Song From a Tour Bus" talks about “L.A. singing...” The song basically reflects on different parts of the globe as I'm touring. Each city evokes something in particular and that was the one I had for L.A.

California is also part of the title track, "101," because the 101 freeway can be one interpretation of that number.

But L.A. is in many things. It's also in between the lines like all my other places are—New York, Paris and Tel Aviv. When I mixed my fifth record with Joe Barresi, I was living in L.A. for a month and I'm sure it got into my work that way as well. 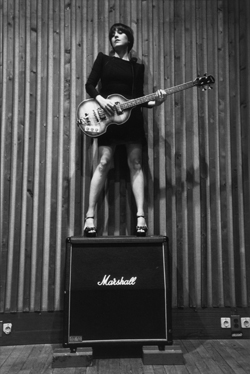 Keren Ann / Photo by Dominique Tarle
What are your favorite things to do when you come to Los Angeles?

First and foremost, I love seeing friends. And an L.A. friend of mine makes beautiful cashmere clothing, so I'm just going to go and buy an entire fall collection while I'm out there. I think I'm also going to try to go to the beach, because I really want to be close to the water.

Sometimes I go to a place to write for two or three months. I still haven't done that in L.A., but it's on my list to go there with my gear and capture the vibe.

I'd like to talk a little more about your spoken word track, "101," where you count down very specific things— number by number—starting with 101 and ending with one. What was the first number you filled in?

The first was definitely "101 floors," because I was in an elevator in Taipei when I thought about doing the countdown. There were things on the list that were very easy to fill in, like "15 minutes of fame." And although this is not a song of mourning or grief, I think most of the images came to me when I was lying next to my dad as he was about to die. That's why I have "75 springs," because he was 75, and "14 months of morphine," because that's what he went through before his death.

Then there are things like the number of Star Trek episodes and the "57 channels" from the Bruce Springsteen song. And the last 10 numbers were sort of inspired by the Bible.

In the past, you've said that the Old Testament is very film noir...

Absolutely. It's the greatest of all film noirs. The cruelty, the beauty, the poetry, the love, the assassinations—everything in there can be very bloody or very poetic depending on how you take it.

Does the number 101 have multiple meanings for you? I know you used to teach math, so is binary one of the interpretations?

Absolutely. Among other things, the value of my initials in Hebrew is 101. It's also the number you call for an ambulance in Tel Aviv. Then there's Psalm 101, which is sort of a chant and my favorite psalm. And as we mentioned earlier, there's the California freeway.

I love that number and I have it tattooed on my arm. Which reminds me, I need a new tattoo...

What do you think it'll be?

I have two things in mind, but I have to finish designing them before I can tell you. All I can say is that I'm working on them.

Which tattoos do you already have?

One on my left foot that's an abstract sea flower with a fish. Then on my right forearm I have an anchor with the number 101. 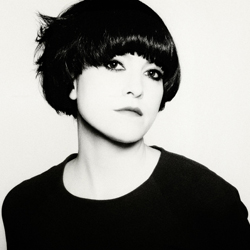 Keren Ann / Photo by Amit Israeli
You're on the road so much that you probably don't have too much time for hobbies, but given that you've often likened the production process to painting and Impressionism, do you actually paint? Do you have any other hobbies?

I paint but I still think I suck. (laughs) I do like drawing, and I work with ink a lot. I'm much better off making music than drawing, but it helps me balance everything I do.

Photography's also something I enjoy. I like to take photos and I post them occasionally on Facebook, but that's separate from the rest of my work.

You have your hands in so many different projects. Is it true that you're writing a gothic opera?

It's something I'm doing with my bandmate, Bardi Johannsson from Reykjavik, from my side project, Lady & Bird. We do a collaboration every other year or so, and this project is called Red Waters.

The premiere is November 4 in France, and we're working on it 10 days a month when we're not touring. The first presentations will be at the Opera of Rouen, then it'll move to Orléans and continue to travel from there. We're very excited about it!

Hopefully it will make its way to L.A. as well.

I would love that!

Thanks for speaking with LAist, Keren Ann!