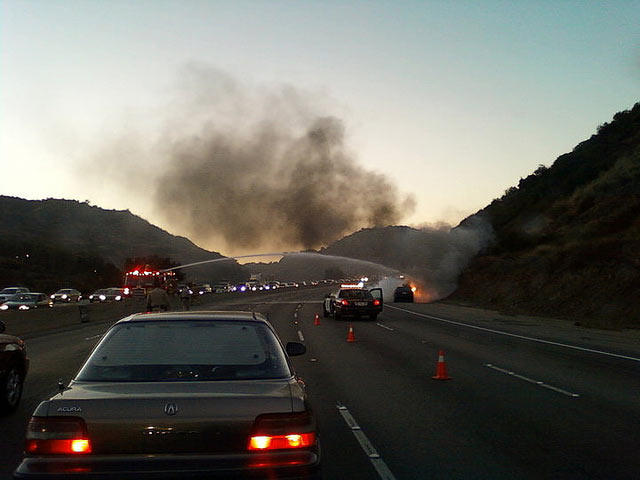 Public safety officials insisted that emergency response will be unaffected by next month's shutdown of the 405 at a community meeting at Skirball Center Thursday night. (Photo by Jo Martin Pix for LAist Featured Photos flickr pool).

City officials insist that public safety is the number one priority in the complex plan surrounding next month's closure of the 405 but an administrator representing four area hospitals fear that essential staff will be unable to commute to and from work.

"If someone isn't there to take care of them who is appropriately competent to do that, that patient is going to be in trouble, now multiply that by a thousand," Posie Carpenter of the Santa Monica-UCLA Medical Center said at a community meeting regarding the closure at Skirball Center Thursday night, according to ABC7.

Carpenter estimated that about 1,500 employees work in 12-hour shifts at the hospitals affected by the July 15-17 405 closure, which include Santa Monica-UCLA Medical Center, UCLA Ronald Reagan Medical Center, the Veteran's Administration Hospital and St. John's, according to the AP.

Public safety officials insist there will be no issues in the passage and transport of emergency vehicles during the shutdown. But how will hospital employees who rely on that stretch of the 405 get to work? "They are flatly refusing to allow the hospital to plan," Carpenter said, according to Studio City Patch. "There is no way to know what the traffic is going to be."

Construction crews will be out around the clock on July 16-17, demolishing one side of the Mulholland Bridge over I-405's Sepulveda Pass as part of a $1 billion project to add a northbound HOV lane to the 10-mile stretch of freeway between the 10 and the 101. Officials are prepared for traffic jams potentially stretching as far south to the Mexican border. Commuters are bracing for Carmageddon.

With three weeks remaining until the shutdown, officials have time to concoct a solution for hospital staff and a plan to temporarily house weekend staff on UCLA campus with bus transportation between the hospitals is being considered. But Carpenter certainly took advantage of Thursday's Skirball session to jolt the plans into action.

"She said she wanted 'to use this opportunity to point out to them, again, their stated goal of safety is not going to be met if they fail to assist the hospitals,'" according to the L.A. Times.