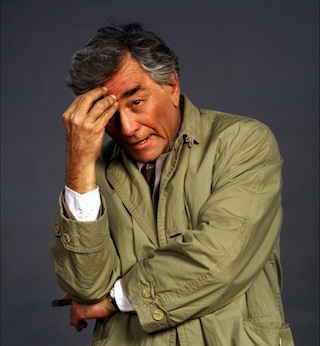 Peter Falk as Columbo
Veteran actor Peter Falk, beloved for his role as TV sleuth "Columbo," has died. He was 83. Falk died Thursday night, a family spokesperson confirmed with local radio station KNX 1070, however no further information about the star's death has been made available yet.

Falk was born in New York City in 1927. As a boy, Falk participated in numerous sports, despite having had his right eye removed when he was three years old because of a tumor. He wore a glass eye for the rest of his life.

Acting became Falk's calling in the early 1950s, and he began his career on the stage. His "breakout" film performance is considered 1960's "Murder Inc." He received an Academy Award nomination for his role in the film, and followed it the next year with a nomination for his work in "A Pocketful of Miracles."

In 2007, Falk reportedly began to suffer from dementia, and in 2009 his wife Shera was appointed his legal conservator. The actor and his life was kept very private in recent years, including at Christmas 2008, when thieves stole the decorations from the couple's Beverly Hills home.