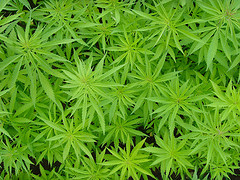 Photo by Alexodus via flickr
A Santa Ana man was shot dead while trying to rob a marijuana dispensary truck along with three friends in Brea on Wednesday night.

The men approached the truck around 8:15 p.m. in the Birchwood Village apartment complex in Brea. When Dang whipped out a gun, the marijuana delivery man's security guard shot him, according to the OC Weekly. He was pronounced dead at the scene.

The security guard fired three shots at Dang, who was holding a handgun, he said. Arriving officers found Dang dead at the scene.

Earl Augustus Austin, 19, of Santa Ana and James Yi, 18, of Irvine were arrested on suspicion of robbery and murder. A third suspect whom police have not yet identified also was arrested.

Austin and Yi were being held on $1 million in bail each, according to jail records.

The name of the dispensary has not been released and the incident remains under investigation. The OC Weekly lists numerous classified ads for marijuana dispensaries that offer delivery services in the area.