Kayaking Trips on the L.A. River to Begin in July 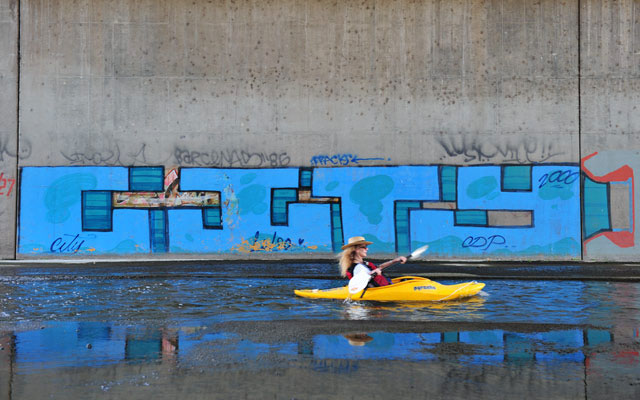 Photo by Tom Andrews, who accompanied a group of activists on a three day trip down the 52-mile waterway in 2008 to prove that it was navigable.

This summer a portion of the L.A. River will be officially opened up for guided kayak tours for the first time.

While kayaking tours have occurred in the past without legal permit, the current program, proposed by a coalition of groups is currently under an environmental review by the U.S. Army Corps of Engineers, reports KCET's Zach Behrens:

On July 8th, a number of groups are collaboratively planning to open up a small portion of the river for a limited number of guided kayak tours throughout the summer. Twice a day on weekends, groups of 10 to 14 will be taken onto the waters of the Sepulveda Basin in the San Fernando Valley. Trips along the 3-mile portion will last a few hours and include educational components.

Tours are expected to cost $50.

Behrens devoted numerous posts to the issue during his tenure at LAist.

Previously:
— Kayaking in the L.A. River
— L.A. River Declared 'Not a River' But What Does That Mean?
— Fighting to Keep the L.A. River a River
— Is the L.A. River Really a River? Documentary Screening at Hollyshorts Film Fest Explores the Controversy
— How the L.A. River was Saved
— Caught on Video: First L.A. River Kayaking Trip after EPA Declares it as 'Navigable'