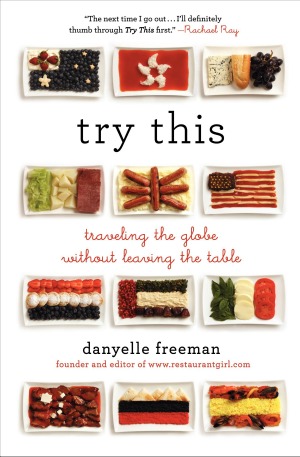 Danyelle Freeman gets labeled a lot. Harvard grad, food blogger, ex-food critic for the NY Daily News, Top Chef Masters judge, but most people know her as Restaurant Girl. Her new book, Try This: Traveling the Globe Without Leaving the Table, is a handy companion for any diners looking to step out of their comfort zone and try some new dishes or cuisines. Try This was released last week and is available in hardcover and for the kindle as well.

What was the inspiration for this book?
Try This was inspired by my 30th birthday dinner at The Spotted Pig, which had just opened in New York at the time. There were 12 of us and we thought we were experienced eaters who knew our way around most menus. But when our server handed out menus, the table got very quiet. The menu was written in English, but it might as well have been a foreign language. None of us had ever heard of or tasted dishes like champs, devil’s on horseback or, my personal favorite, spotted dick. We needed a glossary or some sort of guide to the menu. The next day, I went to the bookstore and searched for one, but none existed, so I decided to write one myself—not just for gastropub cooking, but also for the multitude of cuisines we eat from all over the world nowadays.

What was the most challenging cuisine or dish?
I'd have to say Chinese food was the most challenging. China has the largest population of any country in the world, so just imagine the variety of regional cooking there is to cover. You could spend years eating your way through the Shanghai, Cantonese, Beijing, and Szechuan food to name a few kinds. I actually did some of my best research on Chinese in Los Angeles. California has such a big Chinese population, especially in Monterey Park and Arcadia. If you’re a fan of soup dumplings (Xiao Long Bao), Din Tai Fung in Arcadia is like the holy land and their dumplings are “mysterious acts of God.” It’s the only Din Tai Fung outpost in North America and a compelling reason to move West. You really can sample the astounding spectrum of Chinese cooking without leaving Los Angeles. You’ve got outstanding dim sum, hot pots, hand-pulled noodles, you name it.

What I found most interesting were all the superstitions and norms in each culture. For instance, I had no idea the Chinese considered knives weapons, which is why you won't find them on the table. Considering all the meat is cut up so small, you don't really need them. Noodles symbolize longevity. According to the Chinese, cut your noodle and you cut your life short. Koreans almost never eat alone, which is why I always got stares when I rolled up to the hostess stand and asked for a table of one. They share everything. Aside from soups, everything is communal property, so consider yourself warned. I could go on forever, listing the interesting nuances of each culture's dinner table and table setting.

There's a good chance that pad Thai wasn't originally created by the Thai at all. It was first introduced the Thailand by Vietnamese traders, but didn't really become popular until the government got involved. They were looking to boost the economy, so they encouraged the production of rice noodles several ways, including handing out pamphlets and recipes on how to make pad Thai. Thus, the pad Thai phenomenon was born.

What was filming Top Chef Masters like?
It was amazing! Who could complain about eating all day and judging it, especially with such talented chefs cooking for you? I got attached to the process and the competition, so I found myself missing the chefs and challenges for those two episodes. I was just as curious about what happened as everyone else.

I think it's Top Chef Masters best season yet. The change in format really sharpened the pacing of the show and upped the stakes. Curtis Stone is a smart, talented host and he’s real. He’s not just a talking head. He's a chef with an opinion and he knows where the contestants are coming from and what kind of obstacles they're facing. And I loved all of the challenges, though I have to admit I was relieved to escape the bug challenge. I'll eat anything, but eating bugs for the sake of eating bugs isn't my first choice.

We heard that Curtis Stone, the host of the show, actually cooked one of Ruth Reichl's favorite meals. What did he cook?
I had a meeting, so I missed the lunch at the Beverly Hills Cheese Shop and have been regretting it ever since!

Were you rooting for any chefs? Any surprising results or memorable dishes?
No. I'm pretty sure that's the right answer. I think each of them brought something very different and unique to the table, which is what made it so pleasurable and exciting to eat their food. You never knew what they would make for that particular challenge, but you could always tell who made a dish. If you closed your eyes, you could probably figure out whose dish was sitting in front you by the flavors and style of the dish. One of my all-time favorite dishes was Mary Sue [Milliken]'s poached egg in umeboshi with a mustard miso mayonnaise. It was so precious, and yet tremendously satisfying. Naomi Pomeroy surprised me. She's a relatively young chef, but she's extremely versatile and really held her ground against some veteran chefs, not to mention [she makes] some killer desserts.

Local chef John Sedlar withdrew from the competition early on. Did you get to try any of his food? How do you think he would have done?
I did try his dish for the first episode. He made lamb with a jicama and apple salad, which I remember because the apple in the salad still had the sticker on it. Seriously though, he's a remarkably talented chef with classical training. I've eaten at his restaurants many times. I love how seamlessly he applies his French cooking technique to bold Latin flavors. But how he would've done on the show is anybody's guess. You're not just a chef on Top Chef Masters. You're a competitor and you have to take whatever's thrown at you and make something wonderful and interesting out of it. You're out of your element on so many levels. And standing out is everything on TCM.

While filming in Los Angeles, did you get to eat in L.A.? Where did you go?
Every chance I got! I've always loved eating in L.A. I lived in West Hollywood for several years, so I had already discovered how phenomenal the sushi and all things Japanese and Mexican are on the West Coast. I'm a big fan of Hiko, Sushi Park, and the sadly shuttered Katsu in Beverly Hills. That man was a genius. Aside from Japan, I still can't find better sushi than in L.A. Believe me, I've tried to find it. In my book, I extol the virtues of the galbi at Park's BBQ and the mole at Alegria on Sunset. There are so many amazing places to eat in California.

But I'm obsessed with downtown L.A. right now. The Top Chef stage is located downtown, so I spent most of my free time exploring the downtown dining scene. It's such an exciting time for downtown with places, like Lazy Ox Canteen, & their new spot, Aburiya Toranoko, Church & State, Wurstkuche's sausages, and tons more. I could eat in Little Tokyo every day. I got hooked on the ramen at Daikokuya, yakitori at Koshiji, and sushi at Sushi Gen. I miss eating there!

What an exciting place to eat right now! There were no restaurants, like Animal, Pizzeria Mozza, or LudoBites when I lived there. Los Angeles was always great for ethnic food, but now there's so many talented and ambitious chefs strutting their stuff and getting national recognition for it. My first stop on my next visit Lukshon in Culver City. It's hard to keep up with L.A., which wasn't always the case!

What's next?
Try This just came out, so I'll be promoting it through most of the summer and I'll be coming to Los Angeles in July for a book party and a few signings. I'm sure I'll cram in plenty of eating while I'm there! As for the rest of the summer, I'm a beach girl, so I head to the Hamptons to wander the farmer's markets, dabble in cooking, paddleboard, swim and consume lots of steamers, lobsters rolls and rose. And I will definitely start working on a second book!