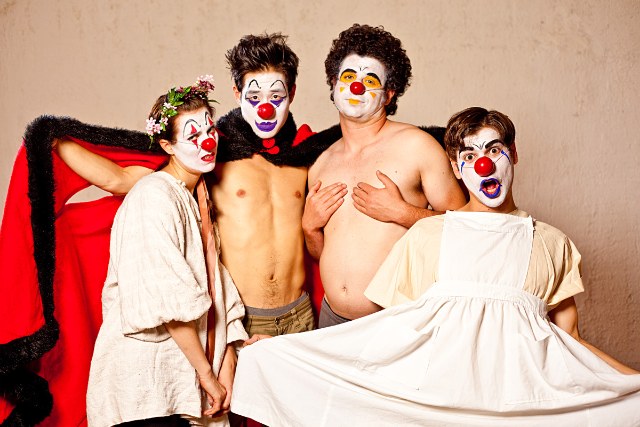 Hollywood Fringe Festival 2011 encompasses more than theatre and musicals — it also features perverted and crass clowns in Four Clowns:Romeo and Juliet; a Moroccan mime in Born to be on Stage; and a narrative storytelling in Next Best Thing.

Through twisted humor, live music, and audience interaction Four Clowns gives clowning some much needed street cred with their very loose (loose in both the literary and promiscuous senses) adaptation of Romeo & Juliet. For this Hollywood Fringe Festival performance, clowns Hamper, Scooter, Biff, and Clementine take on all of the roles of Shakespeare's most famous classic to present the play in an abreviated and updated clown format "Where for art thou?" gets replaced with cut aways to boy-band spoofs and confused clown-style anal sex scenes. Alexis Jones, Kevin Klein, Zach Steel, and Raymond Lee are talented, crowd-pleasing, and hilarious, with Lee standing out as particularly engaging. Working through the comedically gifted and exceptionally well matched troupe, director Jeremy Aluma orchestrates the fast-paced and freaky Four Clowns: Romeo and Juliet with perfect comedic timing. Four Clowns: Romeo & Juliet is playing through June 25 at Art Works Theatre. Tickets are $10.

Another Hollywood Fringe Festival clown show, Born to be on Stage, is Momo Casablanca's coming-to-America biopic told through anecdotal humor and mimed scenes. While Born to be on Stage seems incomplete and more like a work-in-progress, Casablanca's narrative about his childhood in Morocco; culture-shocked immigration; and perspective opening description of the difficulties of being a Moroccan-American Jewish-Muslim-Krishna performer in modern day United States is interesting and magnetic. Born to be on Stage is playing through June 22 at Complex Theatres. Tickets are $12.

Next Best Thing is Antonio Sacre's mesmerizing exploration of the value of love, risk in retrospect, and healing the self through giving to community. Sacre's story-telling piece is NOT one of those typical Hollywood one man shows (you know, the kind where an actor gets up on a stage and tells their only-interesting-to-them, poorly directed, addiction and recovery in Hollywood cliches) — instead it is beautifully poetic, well-constructed, warm, humorous, and uniquely provocative narrative born out of an authentic and unique literary voice. Sacre presents his work with no-frills, genuine simplicity and unmushy romantic charm. Director Paul Stein injects easily digestible timing and less-is-more into the pithy work. Next Best Thing is playing through June 26 at Theatre Asylum Lab or Theatre of NOTE. Tickets are $10.