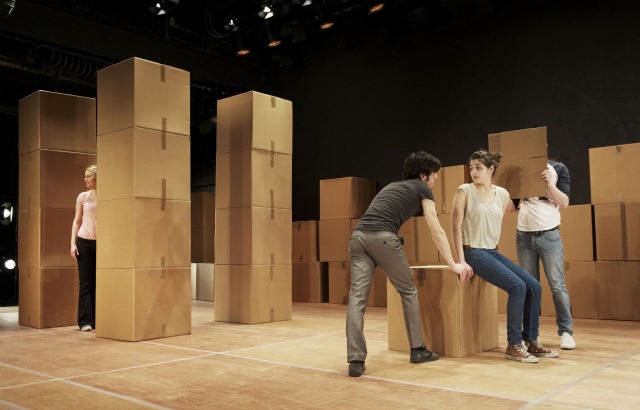 Brian Bennett, Nyree Yergainharsian, Rob McDermott, and Tanya Wilsown in 'As you are now so once were we' (photo by Ros Kavanagh).

Under the direction of Jose Miguel Jimenez, Irish theatre ensemble The Company brings their smooth, motion oriented work As you are now so once were we to RADAR at Los Angeles Theatre Center (LATC). The production uses manipulation of cardboard boxes and choreographed movements to present four meta-narratives of a singular experience spoken in varying tenses. The talented cast is competent and animated with Brian Bennett standing out as an especially good comic force, but the play struggles to retain interest and energy throughout the show. The repetitiveness that the performance hinges on becomes dull. Dialogue directed at and away from the audience conjures up a deja vu sensation of sitting through a high school assembly with education sketches about peer pressure. The opening scenes of As you are now so once were we are visually mesmerizing with a great soundtrack, but the last scenes are patience-trying. 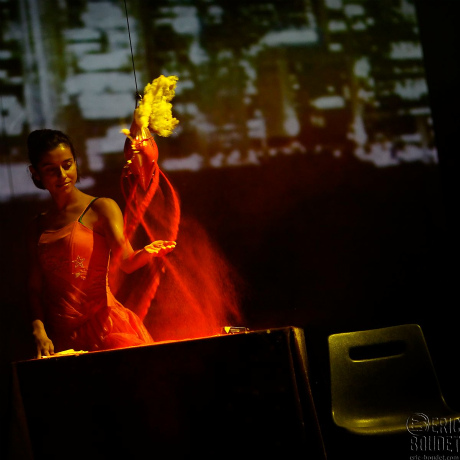 At REDCAT, Amarillo is an exciting, moving, and inventive performance art piece that uses multiple live, visual, and digital mediums to artfully depict the act of crossing the Mexico-United States border on foot through the desert. With stunning imagery, excellent performers, low and throaty singing, poetic language and graceful motion, the cast of Teatro Linea de Sombra and director Jorge Vargus craft a raw and captivating epic that remains emotionally realistic even within the context of visual abstractions.

Method Gun is essentially a play within a play within a play that depicts an actual theatre ensemble, Rude Mechs, as they construct a fictional play about a fictional defunct theatre company as the defunct theatre company rehearses for a production of Tennessee Williams' Streetcar Named Desire that does not include the roles of Blanche, Stella, Stanley, or Mitch, in honor of their long-gone actor guru, who is also named Stella. If the description of Method Gun reads as a mess, it is because the play's script is a fractured and choppy explosion of vintage inflected gimmicks. The cast of Rude Mechs is comedically gifted with a rare sense of quirky humor that helps greatly to help the audience to forget the problematic script.