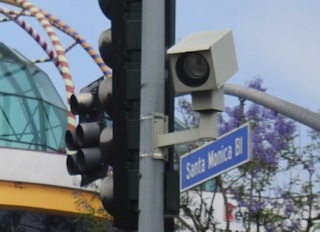 Photo by Andy Sternberg/LAist
The Los Angeles Police Commission is ready to toss out the city's current red light camera and ticketing program, but nothing is final until the Los Angeles City Council has their say via a vote. Today that vote was postponed until early next week, when more Council members will be present to participate.

The motion to delay the vote came from Councilman Tony Cardenas, explains Streetsblog, who note that the eight present members were present to hear "a parade of public speakers" on the red light camera issue.

Some Council members are already expressing disapproval of the current red light camera program, including Paul Koretz, Bill Rosendahl, and Dennis Zine, though Zine was absent from today's meeting.

Not all present today, however, spoke in opposition of the red light cameras:

Before the Council debate began a group of speakers that included public health and public safety officials spoke in favor of keeping the lights while a coalition of neighborhood activists and one technology expert spoke against. During one particularly moving part of testimony, when a family showed a picture of their daughter killed by a red light runner at an intersection, Council Woman Jan Perry, who was chairing the meeting allowed them to speak well over their allotted time.

The vote has been rescheduled for Tuesday June 21.