Peeing Professor Is A Wanted Man, Failed To Appear For Pretrial Hearing 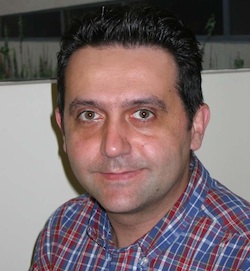 Tihomir Petrov (Photo via Institute for Pure & Applied Mathematics Institute at UCLA)
A $35,000 bench warrant has been issued for Cal State Northridge math professor Tihomir Petrov charged with two misdemeanor counts of urinating in a public place after her was videotaped relieving himself on a colleague's office door.

Petrov "failed to appear for a pretrial conference hearing in the case, prompting the warrant, the Los Angeles city attorney's office said Wednesday," according to the L.A. Times. Petrov's lawyer told the court that he had not had recent contact with his client.

Petrov did appear in court during a March hearing at which he pleaded not guilty to the charges. At that time, the Daily Sundial newspaper quoted one of his attorneys as saying that the professor was concerned about how the charges would affect his career and reputation.

Footage of Petrov was captured in December of him "urinating on the door of another professor's office in Santa Susana Hall," according to authorities. School officials put in place the camera after discovering "puddles of what they thought was urine."