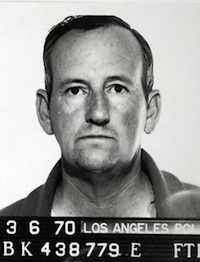 Mack Ray Edwards -1970 (LAPD booking photo)
Investigators now believe Ramona Price, a 7-year-old girl who went missing 50 years ago in Santa Barbara, may have been a victim of serial killer Mack Ray Edwards, who is thought to have killed as many as 20 children.

On Wednesday morning, specially trained cadaver dogs searching for the little girl's remains of found "an area of interest," in a stretch of construction near Winchester Canyon Road and the 101 Freeway, said police, according to the L.A. Times.

At the time of Price's disappearance, Edwards was "a heavy-equipment operator" working on area construction projects, including the Winchester Canyon Road bridge.

Edwards hanged himself at San Quentin in 1972 after being convicted in the murder of three children. According to Santa Barbara Police Chief Cam Sanchez, Edwards remarked in prison that his other murders would never be discovered because, "no one would tear up a freeway."

Said Sanchez, "A cold case does not mean a forgotten case." Ramona Price's parents have died, however her older sister, now 60, is "still devastated."

Edwards' monstrous legacy is still unfolding. Three years ago, authorities excavated an exit ramp off the 23 Freeway in Ventura County, seeking the bones of 16-year-old Roger Dale Madison of Sylmar. Edwards, a neighbor and friend of the Madison family, had admitted stabbing the boy near the freeway when it was under construction in 1968. He worked on that project too, and authorities believe the boy's body may be buried beneath the roadway. After five days of digging, police called off the search[...]

[H]is crimes were extraordinarily brutal. In 1953, he kidnapped 8-year-old Stella Darlene Nolan, molested her, strangled her and threw her off a remote bridge. When he returned the next day to find the Norwalk girl was still alive and had crawled 100 yards, he stabbed her and buried her in an embankment that became part of the Santa Ana Freeway.

For decades, police have been attempting to follow Edwards' trail in Santa Barbara, Los Angeles, Pasadena, Torrance and other areas where children went missing in the time that Edwards was at large. Four years ago, Santa Barbara authorities allowed Pasadena-author Weston DeWalt to view their files for a book he was writing on the Edwards murders. DeWalt reportedly had unearthed information indicating that Edwards worked for a highway contractor in Santa Barbara at the time of Ramona Price's disappearance.

DeWalt is currently looking for shipwrecks off Poland.