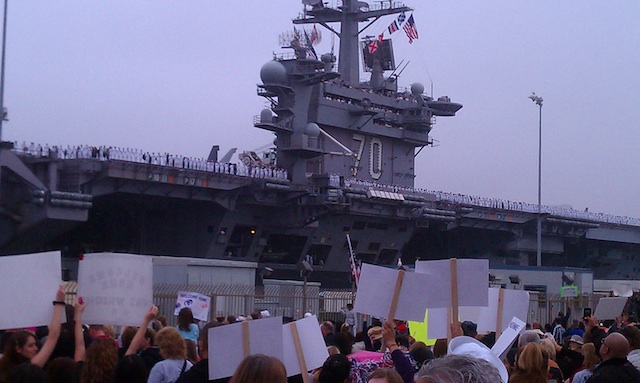 Photo by Locomojo30 via Twitpic

After seven months at sea, the USS Carl Vinson returned to its Coronado home port on Wednesday morning, reports NBC LA. Since its Persian Gulf deployment on November 30, 2010 the ship has faced pirates, a jet engine fire, and, most famously, the carrier briefly held the body of al-Qaeda leader Osama bin Laden before his historic Arabian Sea burial.

During its deployment, the Nimitz-class nuclear-powered carrier also trained with forces of half a dozen nations and provided 95 days of combat air missions to Afghanistan and Iraq. The Vinson's air wing "completed 1,600 sorties, dropping 17,000 pounds of ordnance and firing 2,900 rounds of 20-millimeter ammunition," according to the L.A. Times.

Notes NBC LA, "the carrier won't be in port very long; it's scheduled to head back out to sea on its next mission before the end of the year."