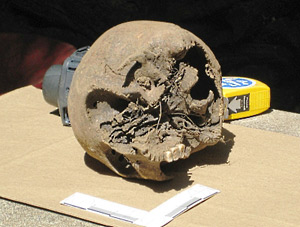 (Courtesy South Pasadena Police Department via Star-News)
Turns out those bodies we so often find buried in our backyards are not necessarily those of murder victims or Jimmy Hoffa but, more likely than we'd think, centuries-old remains of the L.A. basin's pre-European invasion inhabitants.

While gardening in her backyard last month a South Pasadena woman dug up a skull with a few teeth still intact. She called authorities, certain it must have been a homicide victim, only to find out it was just another Native American skull, the Pasadena Star-News reported.

"It's not surprising because it is common, but I think most people are surprised by the amount of history," said Los Angeles County coroner's Capt. John Kades to the paper. "With Native American remains, we look for teeth.... They have a very distinctive wear that has to do with their diet, which was gritty, so the teeth are worn down."

About 10 police cars, coroner's officials and a crime-scene investigation team appeared t the woman's house in the 1600 block of Milan Avenue after she called police. But there was no evidence of a crime.

Rare? Hardly. The Native American Heritage Council is notified of about four such bodies each month. Officials were relatively certain the skull belonged to a member of the Gabrielino-Tongva tribe.

About 400 remains of Gabrielino-Tongva tribal ancestors, the original inhabitants of the Los Angeles basin, were found in 2004 as work on the $4 billion dollar Playa Vista development began, according to the Associated Press, the article reports.