Loss, Manipulation, and Compromise: 'Extraordinary Chambers' at the Geffen Playhouse 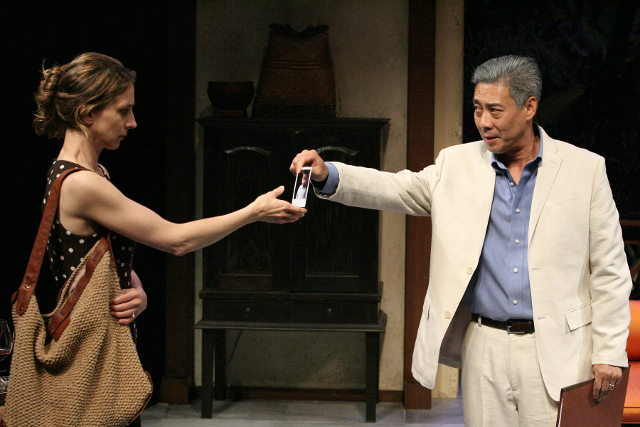 In order to be successful in relationships, business, or politics, willingness to compromise is a necessity. But what happens when you suspect that a series of small compromises has trapped you in a morally questionable place that you don’t quite understand? This is one of many unsettling questions addressed in the world premiere of David Wiener’s drama Extraordinary Chambers.

The play opens with American businessman Carter (Mather Zickel) and his wife Mara (Marin Hinkle) settling into their lodgings in Cambodia. Carter’s excitement to explore Cambodia and finalize a large telecommunications deal is contrasted with a jet-lagged Mara who can’t muster enthusiasm for anything except sleep. Both of their attitudes quickly change when they are startled by the gun-wielding Dr. Heng (LOST-alum Francois Chau), the one person who can help Carter secure his government contract. In a truly magnetic performance, Dr. Heng quickly regains his composure and is revealed to be a refined and charming man of some importance.

As the first half of the play unfolds, it becomes increasingly clear that everyone has a secret and nothing is as simple as it first appeared. Just as the presence of landmines leftover from the Khmer Rouge regime makes it impossible to forget past atrocities, we learn that none of the characters are able to forget about losses in their own lives and let go of the pain they’ve long carried.

While the first half allows the conflict between the characters to develop and breathe, the second half picks up pace as the lives of Carter, Mara, Dr. Heng and his wife Rom (Kimiko Gelman) become further intertwined. Just as each character has their own troubling secrets and is haunted by their past, everyone engages in their own form of calculated manipulation. Even the seemingly straightforward Sopoan (Greg Watanabe), an employee of Dr. Heng who periodically gives monologues recounting the brutalities of war and genocide in Cambodia, is no stranger to making difficult choices and compromises. Extraordinary Chambers concludes with a powerful ending that that you must see for yourself.

Spending an evening seeing a play about genocide that raises questions about moral relativism versus absolutism might seem like a tough sell. However, the smart script contains enough heart and traces of wit (more would have been appreciated) to keep you fully engaged during this twisting and sometimes complicated journey. The uniformly strong performances, skillful direction by Pam MacKinnon, and nuanced reflections on human nature make seeing this play a simple choice.

Extraordinary Chambers is playing Tues.-Sun. through July 3, 2011 in the Audrey Skriball Kenis Theater at the Geffen Playhouse. Tickets are $71-$76 and are available online.