Taking the Fun Out of Funicular: Angels Flight Shut Down By Safety Inspectors 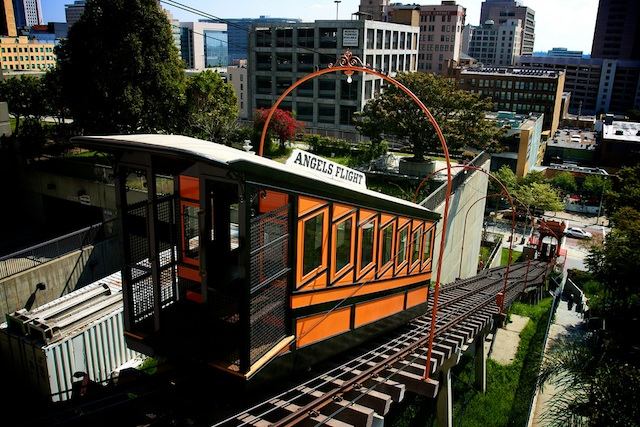 Photo by sfxeric via LAist Featured Photos on Flickr

Downtown's funicular railway, Angels Flight, has been ordered shut down by state safety inspectors due to concerns about the state of the wheels. "Inspectors for the California Public Utilities Commission discovered wheel flange damage during a routine inspection of the Los Angeles landmark," explains L.A. Now.

The damage was discovered during a routine inspection yesterday. The train's operators must make repairs before they are allowed to resume shuttling passengers up and down the Downtown hill.

The nearly 110-year-old railway has been shut down in the past due to safety issues, when, in 2001, a brake failure caused the two railcars to collide, killing one elderly passenger, and prompting a shutdown that lasted until March 2010.

Previously
- 1¢ Rides on Angels Flight Mark Railway's 109th Anniversary
- Historic & Lazy: How Much Would You Pay To Not Hike Bunker Hill?
- Angels Flight to Fly Once Again
- Angels Flight, Downtown's Very Own Railway, 'Will Reopen Soon'