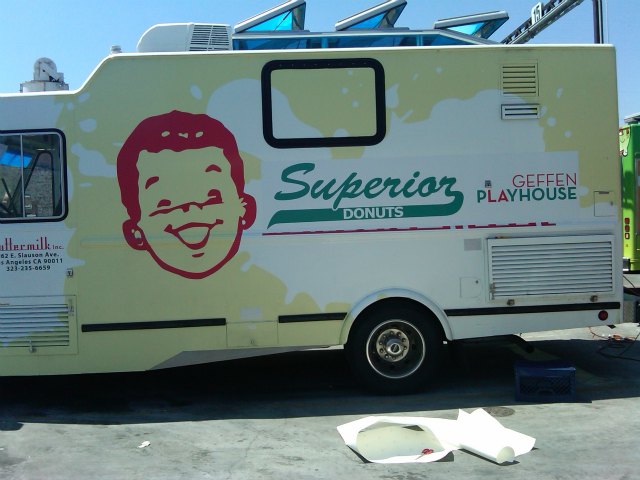 The Buttermilk Truck is incognito this week.

For the past few days, the Geffen Playhouse has commandeered The Buttermilk Truck to spread the word about its current production: Superior Donuts. The truck has been tooling around the city as the Superior Donuts Truck and selling their scrumptious cake donuts—three for $2.50 and five for $4—under a new moniker. (We'll let you have a guess at the sweet treat's name.)

Superior Donuts, written by Pulitzer Prize and Tony Award winner Tracy Letts, is a humorous play of an unlikely friendship set in a sweets shop in one of Chicago’s most diverse neighborhoods.

Tomorrow, in honor of National Donut Day, the truck will be parked in front of the Geffen Playhouse in Westwood from 11:30 am to 2 pm, and the cast of Superior Donuts—including Gary Cole (Office Space), Twilight’s Edi Gathegi—will be serving customers during the truck's lunch run.