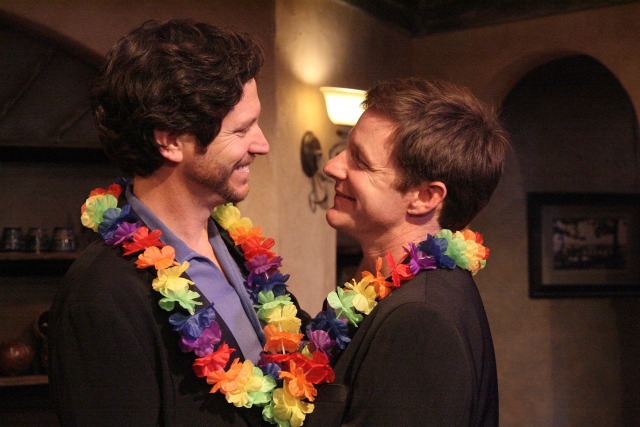 Will Beinbrink and Mackenzie Austin in 'Caught.' (Photo by Michael Lamont)

David Ray's intense and heartening family drama, Caught, is playing at Zephyr Theatre. Now in its 25th week, Caught is currently the longest running play in Los Angeles. This eight month run is remarkable considering the substantial competition for Los Angeles audiences and the pervasive theatrical disinterest that haunts the city. Caught uses emotionally charged writing, excellent performances, instinctive direction, and a rich set to present a family paradigm that cuts through bigotry to embrace the most essential human values of marriage equality, love, acceptance, and dignity.

The cast of Caught is a pleasure to watch. At this point, the performers have internalized their roles and difficult emotions flow with authenticity. Deborah Puette leads as the plot-driving Darlene, a closed-minded, but evolving estranged sister. Puette fluently harnesses challenging secondary emotions such as grief, shame, and resentment to reveal a realistically reluctant and cautiously transforming woman. Playing central character Kenneth, Mackenzie Austin gives the meek character depth through subtle and hesitant interplay of betrayal, humility, and worry. Micah McCain infuses the role of Splenda with wit, warmth, and perfect timing devoid of cliche cattiness. Richard Jenik, plays the small but crucial role of the enraged, tough, and unlikable preacher J.P. with a powerful undercurrent of despair and fear that brings him in and out of the plot with an affecting bang. Finally, Will Beinbrink (as Troy) and Amanda Kaschak (as Krystal) bind the stronger elements of the play together with grounding direction and comedic relief.

Under the direction of Nick DeGruccio, Caught is exciting, compassionate and full of intuitive propensity. Ray uses somewhat stereotypical representations of evangelical Southerners and urban Gay men, but the characters are heartily developed and do not rely on their symbolic prototypes. The diverse and often tear-streaked faces that dot the Caught audience are a telling sign that Ray is not employing formulaic characterizations, but illuminating a cultural nerve that affects many people in a similar way: The marriage equality movement is fought in the public sphere, but the sentient wounds sustained from this civil rights battle are often sustained at home from those closest to its victims.