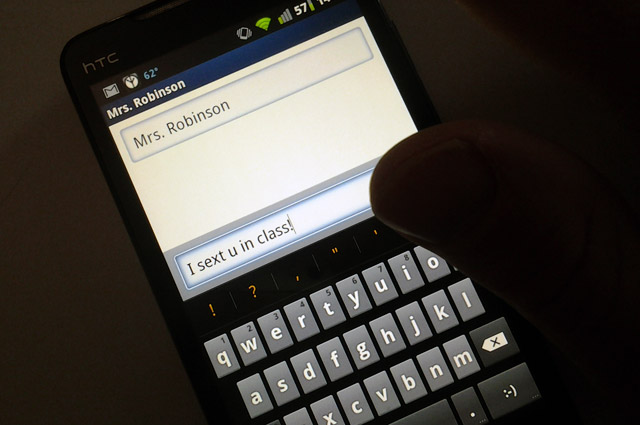 Self-portrait of the author pretending to sext.

Life in Southern California comes with various aspects you can depend on for better and worse: Abundant sunshine, salacious celeb gossip, consistent traffic and government over-legislation.

While we can leave the future of foreskin up to city government (thanks San Francisco and Santa Monica), it appears that what our children can and cannot do with their mobile devices while in class will be determined not on a case-by-case basis or by school principals but in Sacramento — by the California State Legislature.

Senators unanimously passed a bill that would make sexting an infraction for which school officials could expel students.

Senator Ted Lieu, the Torrance Democrat who introduced the bill, says that sexting is a growing problem in California schools, according to the AP. He cited a study saying that 20 percent of teens reported sending or posting nude or semi-nude pictures and videos of themselves.

Lieu's bill - SB 919 - defines sexting as "the sending or receiving of sexually explicit pictures or video images by means of an electronic act." If passed it would become an amendment to the Interagency School Safety Demonstration Act of 1985.

But there's another problem in California schools, Senator Lieu. They're broke and getting broker.

We elect state legislators to do things like balance the state budget, improve education and keep the governor in check. But as Governor Brown is set to cut billions of dollars from the state's education budget and tens of thousands of teachers have already been laid off this year, our state senators are apparently reducing their priorities to babysitting duties.

Besides, the only way to find out what exactly a student is doing with their cellphone or mobile device is to confiscate it and go all Patriot Act on the contents within.

Undoubtedly coming soon: a proposition that would ban sexting while acting as a California State lawmaker.