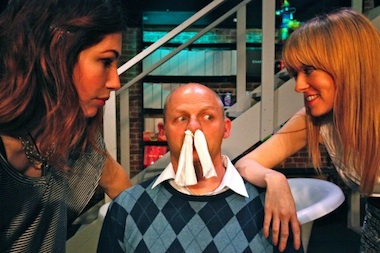 Kiki Lambden, Troy Blendell, and Kimberly Yates in the Los Angeles premiere of The Mistakes Madeline Made
Ten minutes into the Los Angeles premiere of Elizabeth Meriwether's 2006 play Mistakes Madeline Made, you may find yourself relaxing comfortably in your seat ready to spend the next 65 minutes laughing about having a lousy job working for rich people.

We are introduced to Edna, starting a new job as a personal assistant to a wealthy New York family. Since there’s no point in having only one assistant when you can afford a dozen, Edna shares a basement office with Beth, a perfectionist and self-proclaimed “Lion Tamer,” and Wilson, a quirky but kindhearted character. While the play appears at first glance to be about wealth and what her employers have, it soon unveils itself to be about what Edna has lost.

While the jokes continue to hit for the remainder of the play, an uncomfortable tension begins to build as the audience watches Edna try to cope with the loss of her war journalist brother. On her path to accepting her loss, remembering her brother, and learning to move on, she acts out in the office by recruiting Wilson in a cold war against the controlling Beth. Further comedic relief is provided by a string of writers Edna sleeps with to numb her pain and fill the void of her loss.

The small but talented cast fills the small theatre with laughter as well as an intensity stemming from the discussion of weighty topics like depression, modern warfare, and guilt. Where the play truly succeeds is when the audience is chuckling at the same time that the tension is palpable. If you’ve recently enjoyed Meriweather’s No Strings Attached or are looking forward to her new TV series The New Girl starring Zooey Deschanel, head to the Lounge theatre to see why Hollywood is now knocking down her door.

Mistakes Madeline Made is playing Wed.-Sat. through June 4 at The Lounge Theatre. Tickets are $20 and available online.