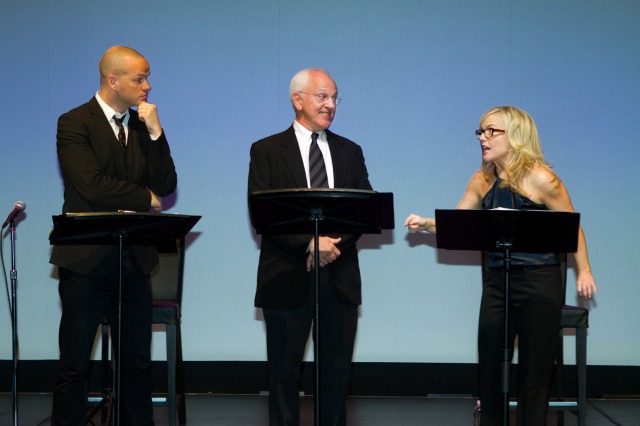 Standing on Ceremony: The Gay Marriage Plays is currently playing at the Los Angeles Gay and Lesbian Center. The show features nine short one-act plays from nine distinguished and notable playwrights including Jeffrey Hatcher, Jordan Harrison, Moises Kaufman, Joe Keenen, Neal LaBute, Wendy McLeod, Jose Rivera, Paul Rudnick, and Doug Wright. A rotating cast that changes each week performs each piece as a staged reading. The performance is bare-bones, but tasteful, and features a strong sense of purpose, talented performers, and poignant writing in one of nicest venues in the city. Please note that this review pertains to the May 9 cast only.

The thoughtfully curated program of one-acts covers an emotional spectrum from tragedy to comedy and drama to satire. Direction is minimal without a traditional set — neutrally dressed performers read amid aural blue lighting for the entire show. Most importantly, Standing on Ceremony: The Gay Marriage Plays, is a poignant advocacy program that highlights the ongoing struggle for marriage equality in the United States. Each one-act exposes the very real, day-to-day social and interpersonal issues that surface for those denied the civil right to marry because of widespread homophobia and hatred.

Standing on Ceremony: The Gay Marriage Plays is playing at the Los Angeles Gay & Lesbian Center's Village at Ed Gould Plaza on Monday nights through June 17. Tickets are $35 to $50 and available online.