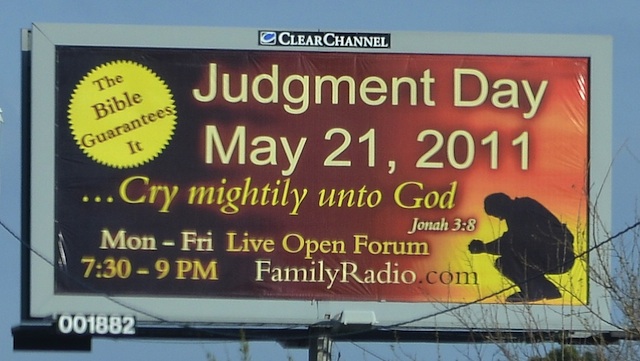 Camping, of Oakland-based Family Radio, mounted an extensive billboard and promotional campaign to spread the word about Judgment Day, though on the day-of, he was conspicuously absent from the media. As SFist illustrates, at 6:01 p.m. local time on Judgment Day, Camping was tucked away in his home, curtains drawn.

But Camping was wrong: Shouldn't he eat a little crow after all his crowing? Or at least explain why he was wrong, despite insisting he was so right?

Euro-American Evangelical pastor John S. Torell said Camping already had an "Oops, I'm wrong" speech ready, claiming, "he has already prepared a defense to explain to the radio listeners that he was not wrong, but that God has heard all the prayers and seen the repentance of people, and in His mercy has postponed the judgment."

Camping told the San Francisco Chronicle he was "flabbergasted" the rapture did not happen, noting, "[i]t has been a really tough weekend."

Because of Camping's claims, many people spent their life savings on the cause, ran up credit card debts they thought would be non-existent come May 22, and, as Ketcham points out, "suicide hotlines have been set up to help those True Believers who've had their faith pummeled by Camping's faulty predictions."

But did these believers act willingly? Was Camping lying?

"Harold Camping is NOT a true Christian, and has fabricated his own cult," writes David J. Stewart on a section of the site Jesus-is-savior.com called "Harold Camping's Heresies EXPOSED."

She concludes, "[Camping] has preyed on the beliefs of faithful men [...] I believe these people have been wronged by an old man who should know better than to shout 'Fire!' in a crowded theatre. And I believe Harold Camping, a quintessential false prophet, knew perfectly well there would be no fire."

Lawyers, get your briefs ready!