Half of all fixed-line internet traffic delivers video, audio and other real-time experiences from websites and applications such as Netflix, YouTube and iTunes, displacing good ol' web browsing for the first time as bandwidth leader during peak internet hours in North America, according to a new study. 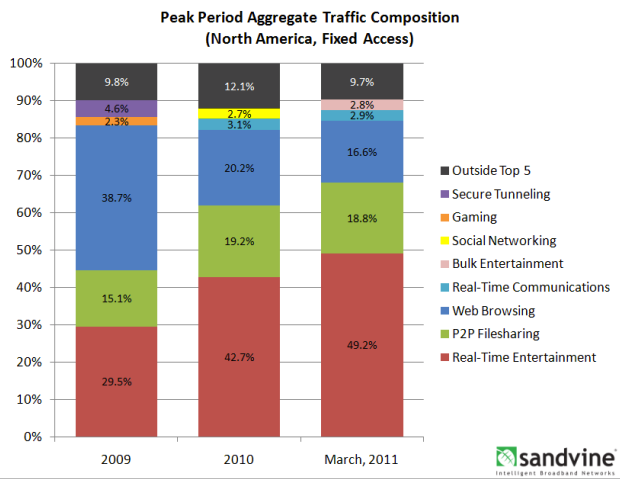 Netflix represents 25 percent of all bandwidth during peak hours (roughly 7 p.m. - 2 a.m.) including 30 percent of all downstream traffic according to the study. Of course, delivering video content requires exponentially more bandwidth than than typical web browsing (to state the obvious). The report, published by network solutions provider Sandvine, also concludes that Netflix's rise correlates to a downturn in BitTorrent or P2P file sharing, which offen includes pirated or unlicensed files.

With the introduction of connected TVs, more and more cable subscribers cutting the cord, and the skyrocketing popularity of online streaming services such as Netflix (not to mention hundreds of other music, tv, movie, and video streaming sites in addition to downloadable podcasts), this doesn't come as much of a surprise.