For Those Who Suckle At The Silvery Teat Of PBR: Pabst Corporate Headquarters Moving To Los Angeles 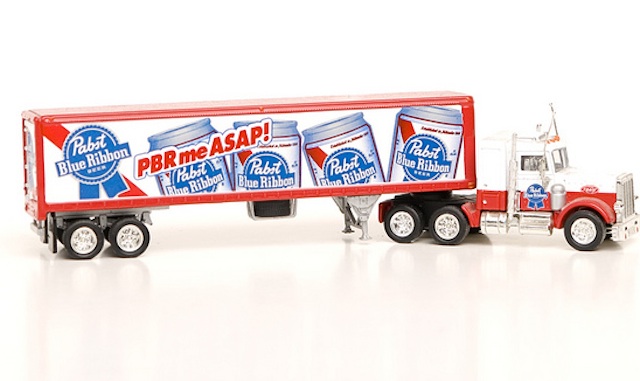 Photo by playonthefreeway via LAist Featured Photos pool on Flickr

This summer, the hipster beer mothership, Pabst Brewing Co., will move operations of her silver cans from Woodridge, IL, a Chicago suburb, to the bosom of Southern California. The decision to relocate headquarters to Los Angeles comes following the company's purchase last year by billionaire investor C. Dean Metropoulos for for about $250 million. There was no immediate word on speculation that tax incentives may have prompted the move, or how many local jobs might be created, notes the LA Times.

Pabst spokesman Mark Semer said that Metropoulos' two sons, Daren and Evan, both live in Los Angeles and run the company with their father, who lives in Greenwich, Conn. Pabst was owned for about two decades by the charitable foundation of the late Los Angeles brewing mogul Paul Kalmanovitz. The Internal Revenue Service ordered the Kalmanovitz Charitable Foundation to sell the company because a federal law barred charities from owning a for-profit business for more than five years.

Well-known in food circles, the elder Metropoulos has made a fortune reinvigorating household brands such as Bumble Bee Tuna, Chef Boyardee and Ghirardelli Chocolate. Earlier this decade, he helped build Pinnacle Foods, the parent company of brands such as Vlasic Pickles and Hungry Man frozen dinners. Blackstone Group bought Pinnacle four years ago for $2.2 billion. The Metropoulos family is expected to shake up the company and move aggressively to rebuild Pabst brands, said Eric Schmidt, an analyst with research firm Beverage Information Group.

In an effort to stay competitive in a growing craft beer market the company has developed alternate new products like the Loko-esque fruit-flavored Blast by Colt 45. Pabst also owns Lone Star, Colt 45, Old Style, Schlitz and many more labels with "regional appeal." Sales of Pabst Blue Ribbon reportedly make up about 30% of total sales thanks to a renewed popularity "with the young generation of hipsters who embrace its blue-collar roots and low price," says the LA Times.

The old Pabst brewery complex, now an artist loft community, need not worry about its machinery chugging back to life following the move. Pabst won't be bringing any brewing jobs to Southern California, notes the Times, "because MillerCoors brews and bottles its brands. MillerCoors has a brewery in Irwindale, which it opened in 1980 and now employs almost 600 people."