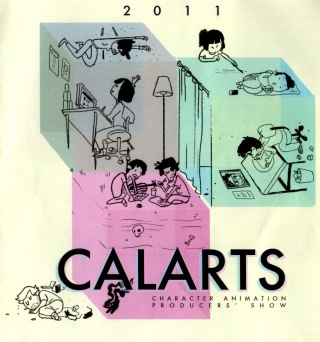 On Thursday night, CalArts presented its annual Character Animation Producers' Show, which showcased some of the best of the best from this year's students. Twenty-three cool, inventive and oftentimes funny shorts played to a packed audience at the Leonard H. Goldenson Theatre in North Hollywood.

Pixar director, Oscar winner, and alum Pete Docter (Up) gave out the awards this year, telling students this will be "the last time you get one-hundred percent creative control." Nelson Boles' artistic and playful Little Boat won the Walter and Gracie Lantz Animation Prize. The simple story of a skiff staying afloat across the seven seas was both touching and delightfully minimalist.

Some other standouts from the show were the two entries from Jeff Liu, whose Hummingbirds and Holograms served up not only a fun, funky little story of a girl and her pup, but a catchy psychedelic music video, about, what else, hallucinatory hummingbirds. I am still laughing over Jacob Streilein's GrandMugged, which features a crook overpowered by a little grandma in a surprising twist of fate. Finally, Jasmine Lai's Brave provided a dramatic counterpoint to many of the evening's comedies. The short, about a girl and her father caught up with the mob, recorded in Mandarin with English subtitles, demonstrated both a strong aesthetic and a clever voice all her own.

That written, each short was spectacular in its own unique way; it is hard to believe that any of these filmmakers are still in school. But don't worry if you missed the show, more than likely you will be seeing these students' future work on your television or movie screen very soon.