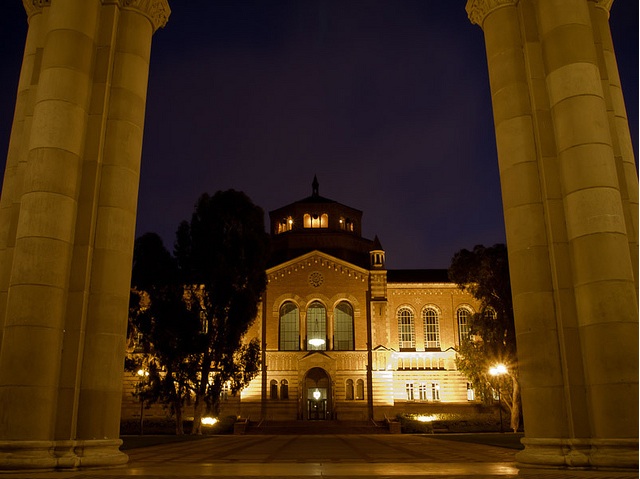 Photo by antith3tic via LAist Featured Photos pool on Flickr

A reduction in state funding has already forced tuition increases, class option decreases and layoffs in the University of California system. Now, leaders of the 10-campus education chain are considering a proposal to allow undergraduate tuition to vary by campus, reports the L.A. Times. Advocates say that "the change would raise funds the schools could share and that consumer demand should play a bigger role in setting tuition. But opponents contend that the idea is inherently elitist and could harm the unified nature of the UC system."

Other state university systems have established varying tuitions for their campuses but in most cases there is a "single clearly recognized flagship, such as the University of Texas at Austin or the University of Wisconsin at Madison, which typically are allowed to charge higher tuition than the others," notes the L.A. Times.

In the UC system, however UC Berkeley and UCLA coul both be considered "flagships," as well as "several other campuses with high national rankings," according to analysts. Also by contrast, notes the L.A. Times, California additionally has "a second public university system, the Cal State system, which traditionally has emphasized its teaching mission more than academic research and charges lower tuition than UC."

Perhaps not surprisingly, officials at UC Berkeley and UCLA have been among the most vocal advocates for some freedom in setting undergraduate tuition rates, which now are established uniformly by UC's Board of Regents. The board has raised basic in-state tuition 8% for next school year, to $11,124. Campuses charge varying other fees for student activities, health, parking, and room and board that can bring total costs to more than $27,000 a year. UC's graduate and professional schools set varying tuitions, with approval from the regents.

The university system is continuing to explore options.