Biblical Law Vs. Copyright Law: Photoshopping For God & The Case Of Disappearing Hillary 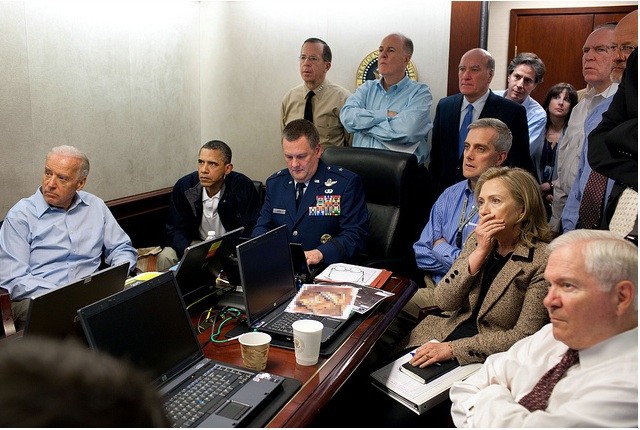 The blog Failed Messiah was the first to post an image from a story in a Hasidic newspaper, Der Tzitung (or Der Zeitung depending on which Bubby you ask), showing an altered reality of the newly iconic Situation Room photo taken during the Osama bin Laden strike. Director of Counterterrorism Audrey Tomason is missing, and Secretary of State Hillary Clinton's tuchas has been photoshopped out of her chair and out of the picture.

Often, a photo taken by an officer or employee of the US government as part of that person's official duties is not subject to copyright in the United States, notes this handy resource. However usage restrictions sometimes do exist, and the photograph in question was "not be manipulated in any way" as clearly written on the Flickr page where the image was made available.

In an emailed statement to the Washington Post, Der Tzitung pointed fingers at their photo editor who "did not read the fine print on the picture," and affirmed that they are "proud Americans of the Jewish faith," apologizing to the White House and State Department saying:

The allegations that religious Jews denigrate women or do not respect women in public office, is a malicious slander and libel. The current Secretary of State, the Honorable Hillary R. Clinton, was a Senator representing New York State with great distinction 8 years. She won overwhelming majorities in the Orthodox Jewish communities in her initial campaign in '00, and when she was re-elected in '06, because the religious community appreciated her unique capabilities and compassion to all communities. The Jewish religion does not allow for discrimination based on gender, race, etc.

We respect all government officials. We even have special prayers for the welfare of our Government and the government leaders, and there is no mention of gender in such prayers.

In accord with our religious beliefs, we do not publish photos of women, which in no way relegates them to a lower status... Because of laws of modesty, we are not allowed to publish pictures of women, and we regret if this gives an impression of disparaging to women, which is certainly never our intention. We apologize if this was seen as offensive.

Jewish Week notes that Der Tzitung's practice of not publishing photographs of women "considered sexually suggestive," may be following one religious principle, but may be violating another "g'neivat da'at (deceit)" in governing acts of censorship.