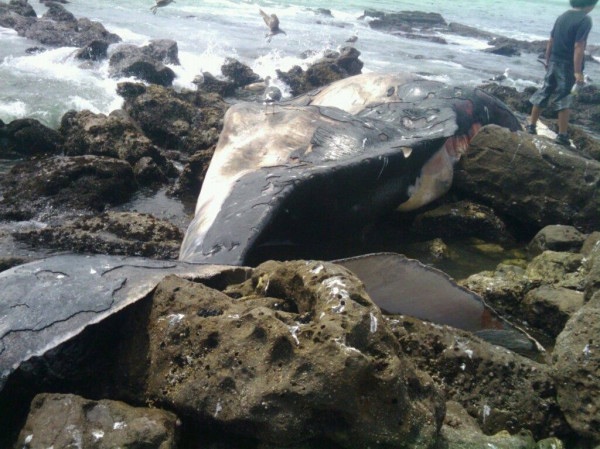 Photo by SandyMazza via Twitpic

Approximately two-thirds of an adult humpback whale washed up onto the rocks at White Point Beach in San Pedro this weekend after being killed by a "ship strike," said officials. Missing its head and torso, the animal most likely was hit by a large vessel and sucked into a propellor that severed the ocean giant.

A 30-foot section of the mutilated creature (believed to have been a full-grown male, likely measuring 50 feet long) remained on the rocks, decomposing, as of Sunday, according to the Cabrillo Marine Aquarium, reports the San Pedro News Pilot.

At the time the carcass was discovered on Sunday there was no odor and at least one of the barnacles attached to the fluke fin was still alive leading experts to suggest the creature had been dead for three to five days. Aquarium staff on the scene notified authorities.

We soon realized that it was not a whole humpback; the head and chest area, including the long pectoral fins were missing. It was as if about a third of the whale had been sliced cleanly off with a huge sharp blade. Like the propeller from a large ship. I immediately called Dave Janiger, curatorial assistant at the Natural History Museum of Los Angeles County and the person responsible to respond to dead stranded marine mammals in the area. He arrived very quickly with his wife, marine biologist Alisa Schulman-Janiger, and soon delivered his verdict: ship strike.

The crushed ribs and mangled vertebral column clearly indicated that the whale had been hit at high speed by something large and blunt, most likely the bulbous bow of a large ship. Then it probably was sucked in by the propeller and the front third of the animal was sliced off.

Other indications of the cause of death, according to officials, "The whale had a large contusion and pooling of blood on its back just forward of the dorsal fin, indicating that it had probably been hit by a large ship and was swept into the propellers," notes the L.A. Times.

Reportedly, Humpback whales, an endangered species, are showing signs of rebounding. In the North Pacific, there are approximately 18,000 whales, with an estimated 1,700 feeding off the coast of California in fall and summer months, notes the Long Beach Press-Telegram. The local feeding areas, however, directly intersect the shipping lanes for vessels making their way to and from the busy Ports of Los Angeles and Long Beach.

Notes the San Pedro News Pilot, efforts are underway to slow cargo ships in "biologically sensitive" areas, though speed restrictions are reportedly voluntary, with ships only reducing speed in lanes when whales are spotted.

While whales have excellent hearing and are usually acutely aware of everything in their environment, it is believed that the design of large cargo ships prevents the engine and propeller sound to propagate directly ahead of a moving vessel. Scientists like John Calambokidis of the Cascadia Research collective have been studying the whales’ behavior around large ships and are making some worrisome discoveries. The large whales, who aren’t really wired to fear much in the ocean, come to the surface when startled, which pits them right in the danger zone.

The incident will be reported to the Large Whale Ship Strike Database compiled by tNOAA.Tissues samples were taken to the Natural History Museum of Los Angeles to confirm the age, sex and to test for toxins, notes the L.A. Times.