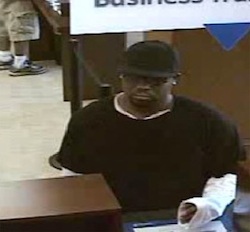 Police said in both cases, no weapons were seen, and the suspects used a demand note. No injuries were reported in either robbery. Suspects fled with an "undisclosed" amount of money, according to police, reports CBS Local. "Authorities believe two different suspects were responsible for each robbery."