Emergency Room with a Joule: 'Entropy General' at MADhouse 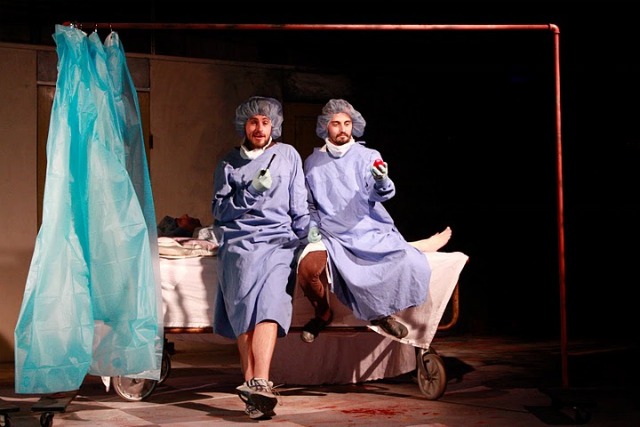 Alive Theatre's current production at MADhouse is the silly and deranged Entropy General. The tone of playwright Ryan McClary's hilarious script falls somewhere between M*A*S*H* and the late 1970s satire Soap with its off-color, often physical humor spliced with deep philosophical speculation about the meaning of life, death, and suffering. While not a sketch comedy per se, Entropy General does have elements of the theatrical form such as quick scene changes; slight character development; and strong, eccentric personas that evoke gut-bursting laugher.

The cast of Entropy General is large with 16 performers playing 24 characters, although there are several audience favorites: Nick Williams and Aaron Van Geem appear only on stage together as Wolfe and Hunter, an impulsive duo of doctors with excellent stage chemistry and timing. Wolfe and Hunter's lines, enhanced by the whimsical idiosyncrasies of Willliams and Van Geem, are often the funniest moments of the play. Andrew Eiden is introspective and calculating as the the morbid, yet sentimental pathologist. He is a talented performer that makes easy transitions from somber and substantial monologues to the plays frequent moments of jocular frenzy. Finally, Maria Ashna is remarkably convincing as Joey, a terminally ill and adorable little boy. Ashna, an unlikely choice for her role, is exceptionally in tune with her character and uses cherubic cuteness to cull sympathetic "awww" exclamations from the audience.

As implied by its title, Entropy General is aptly chaotic under the direction of Turner Munch. The play has a few superfluous scenes that should not have made the final cut, but overall, the lively hospital scenes are engaging and choreographed well. The institutional concrete and warehouse-style setting of MADhouse with set design by George Amerman and Fred Kinney perfectly suits the messy emergency room and morgue scenes. Alive Theatre's ushers, concession, and box office staff give the audience an immersive experience that begins at the venue door as they too play hospital administrative staff.