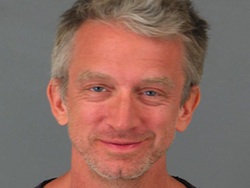 (Photo Credit: Riverside County Sheriff)
Comedian Andy Dick has been arrested again in Southern California, this time for being "drunk and disorderly in public" after an incident at a Temecula restaurant, say authorities, reports the Associated Press.

The Riverside County Sheriff’s Department website says the 45-year-old comic actor was arrested Monday night at a Temecula restaurant and booked for investigation of disorderly conduct involving drugs with alcohol. He was released after posting $500 bail.

Dick pleading guilty and received probation in 2008 after and incident where he was found with weed and a Xanax after allegedly groping the breasts of a 17-year-old girl outside a restaurant in Riverside County. Last year, notes the AP, he was "charged with sexually abuse over allegations that he groped a bouncer at a West Virginia bar."

Messages left for Dick's attorney were not immediately returned on Tuesday, reports the AP.