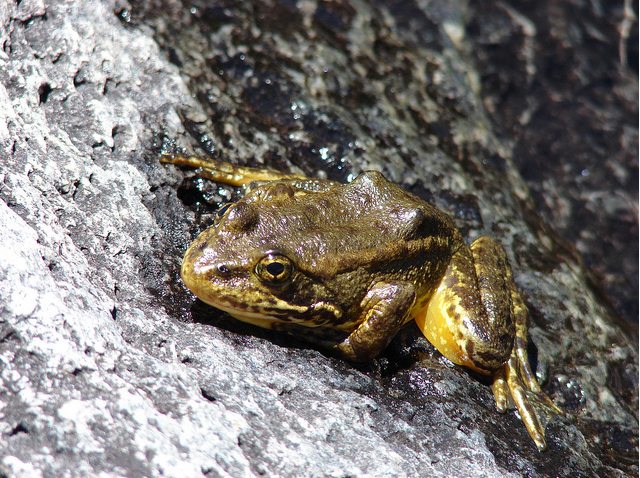 April is National Frog Month, so it was as good of a time as any to sue the feds over failing efforts to protect an endangered SoCal frog from extinction.

An environmental group, the Center for Biological Diversity, reportedly filed a a 60-day notice of intent to sue the U.S. Fish and Wildlife Service on "allegations that the agency failed to develop a recovery plan for the endangered Southern California mountain yellow-legged frog," reported the Riverside Press-Enterprise notes the Associated Press.

For nine years the mountain yellow-legged frog has been on the federal endangered species list with only 200 adult frogs remaining in the San Bernardino, San Jacinto and San Gabriel mountains, notes the Press-Enterprise where they once thrived.

Scientists with the San Diego Zoo and U.S. Geological Survey have worked aggressively in the past few years to breed the frogs in a laboratory and return them to the wild in hopes of increasing the population. Lack of a recovery plan — a road map of steps required under the Endangered Species Act to save a plant or animal from extinction — has made the work more difficult, said Adam Backlin, a USGS ecologist working on the frog breeding project.

The suit also addresses the endangered California tiger salamander. A Fish and Wildlife spokesperson declined to comment because of pending litigation.