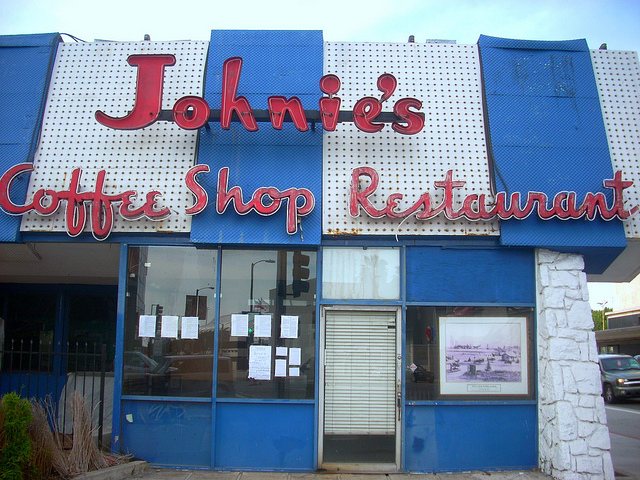 In 1947, along with Louis Armet, architect Eldon Davis formed the firm Armet & Davis. After years of designing some of Los Angeles' most iconic "Googie" style restaurants, the duo became known as the "Frank Lloyd Wright of '50s coffee shops." Davis died Friday at the age of 94.

Los Angeles Magazine's Chris Nichols talks about the legacy of the architect in his remembrance:

Davis and his partner Louis Armet gained fame for their eye catching and exuberant restaurants of the 1950s and ‘60s including Norms, Pann’s, Ships and the Wich Stand. Their style was spread nationwide with prototype designs for Bob’s Big Boy and Denny’s. In 1963 Victor Newlove joined the firm that is now known as Armet Davis Newlove and heads the company that is still creating restaurants, churches and civic buildings.

In 2007, having just turned 90, Davis led Googie-enthusiasts on a tour of seven buildings he designed that were still in use. There, fans got to join the architect in a restaurant with a kitchen in full sight, which was a Davis hallmark; at the time, Newlove explained: "Everybody loves to see somebody cook."

A full list of Armet & Davis designed buildings is on Wikipedia. "He created all my favorite places," said Nichols. Chances are you've spent some time at a Davis-designed place or two, too.