Your iPhone Knows What You Did Last Summer, Or At Least Where You Were 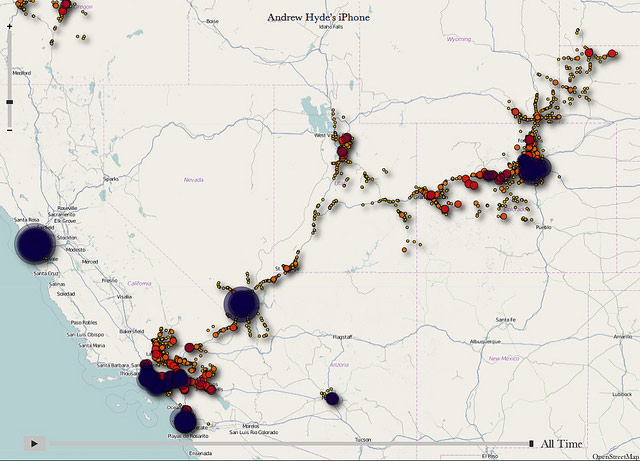 Andrew Hyde gets around. The iPhone Tracker app confirms this. (Photo via flickr).

Andrew Hyde sold all of his worldly possessions last August and began a trip around the world. He makes no secret of this — its detailed on his website. We're well aware that personal information becomes vulnerable whenever we agree to the terms of service of yet another fun geo-location mobile app as it typically utilizes information from the phone's positioning to track real-time location. But this week, geodata geek and author Pete Warden released an open-source iPhone application that exploits a file in iPhone 4 (or iPad 3G) containing all recorded geographic data in the phone's history.

The information is available without a password to anyone with access to a laptop that the iPhone in question has synced with, notes Hyde. iPhones and iPads on iOS 4 record approximate the data based on the devices distance from the cell tower it is connected to at any given time. Is this something to worry about? Not really. Unless you're a criminal with a bullshit alibi — data from cellphones and other mobile devices have been used by authorities for years.

Thanks to a California Supreme Court decision in January, no warrant is required for authorities in our state to search cell phones or mobile devices of arrestees.

But for some, the fact that Apple is aggregating all historical geo-tracking info in one file on it's latest iOS 4 firmware (named consolidated.db) is reason enough to freak out. Concerned comedian Senator Al Franken fired off nine questions in a letter to Steve Jobs. Says Franken:

According to the researchers, this file contains consumers' latitude and longitude for every day they used an iPhone or 3G iPad running the iOS 4 operating system — sometimes logging their precise geo-location up to 100 times a day.

We're concerned about our privacy. In fact 58 percent of women and 52 percent of men are concerned with privacy issues in regard to geolocation and mobile check-in apps like Foursquare and Gowalla, according to a Nielsen study published Thursday.

That's a good thing. Be concerned and be cautious. Be protective of personal and private information. Password protect or encrypt your backups/syncs. But don't get carried away by such simple excuses for media outlets to fuel panic with horror film-esque headlines such as the one above.

If you care to dive deeper into the discussion, please do in the comments below, or check out the blogstorm on the issue indexed at Techmeme.