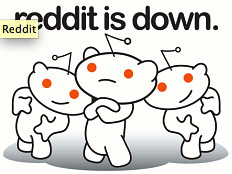 As if the traffic situation isn't about to be a nightmare IRL with President Obama arriving at LAX around 2:30 p.m., an outage affecting web apps and services dependent on Amazon's EC2 servers has crashed many of our favorite online procrastinatory tools and destinations.

What does this mean? We haven't been able to monitor our social networks with Hootsuite, check in on Foursquare, ask questions on Quora, or check in on the real news of the day at Reddit for... going on twelve hours!

When can we freely procrastinate again? Amazon's latest update asks us to give them "a few hours." But that's just a "high-level ballpark estimate."

We've all heard it said and many of us rely on "the cloud" whether we realize it or not. In most cases its extremely reliable, especially with Amazon's Elastic Compute Cloud (EC2). Except, of course, when it's down.

See AllThingsD for a long post of updates and a list of companies and online services affected by the outage.

Cloud computing, relies on a network of remote servers to host and deliver content. It is generally less expensive and more reliable than managing assets (and backups) in house. When you stream music from SoundCloud, use Google Docs, upload content to your tumblr or use Dropbox or MobileMe to sync you are accessing The Cloud.

Amazon's EC2 serves a slightly different purpose. Instead of having a content backup and delivery focus, its primary function is to deliver dynamic processor speeds to businesses. This makes it possible for companies with staggering traffic trends to pay for only the CPUs necessary as opposed to paying to power and maintain the equivalent of a supercomputer to serve the occasional burst in traffic. Amazon's more traditional cloud product is Amazon Web Services, which hosts tons of content, including, for example, your Twitter profile photo.

What websites will you be checking out in the meantime while you're stuck at home because Obama is bringing a traffic nightmare to town?