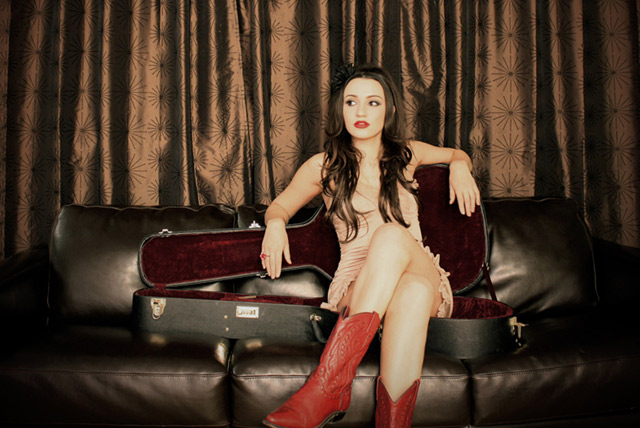 In the title track from her forthcoming album, Lindi Ortega claims, "You're going to know me by my little red boots…" That may be true, but you won't soon forget her voice either. Little Red Boots is a mix of country, folk, rock and pop—as well as her own Mexican/Irish heritage.

Ortega recently sang backup for Killers' frontman Brandon Flowers during his solo tour, and opened for acts such as Keane and Ray Davies. Now it's time for her to take center stage, and there’s no doubt she's ready. LAist caught up with Toronto-based Ortega last Saturday to learn more about the new album, her obsession with birds, and the music video she created on an iPhone.

LAist: How has your music evolved over the years?

Lindi Ortega: It's evolved quite a bit. As far back as 2001, I self-released a couple albums that I sold at the foot of the stage after concerts. The very first one had a cabaret feel with a little country mixed in. The next CD and the Drifter EP also had a bit of that country feel. But when I signed with Last Gang Records, I decided to go with the full-fledged, alt-country-rockabilly vibe I'd always wanted to do. So I just ran with it.

The album features instruments such as the Wurlitzer, glockenspiel and banjo. What was your favorite instrument on this album?

Probably the banjo. I think it adds such a cool element. I really love the "Blue Bird" track on the record because it's got that old-school bluegrass feel to it. And there's also banjo in "I'm No Elvis Presley." It really comes at you in the second verse.

You once said that your red boots, red lipstick, big glasses and guitar make you feel like a comic book superhero when you perform. Might you go the animation route for a "Little Red Boots" music video?

I've always wanted to incorporate animation into a music video. I think it would be so amazing to go with a comic book feel—especially for that track!

Is "Little Red Boots" usually the crowd favorite when you play live?

Yeah, that was especially the case when I was touring across the Midwest and opening for Kevin Costner & Modern West. That's where the song was born.

People kept coming up to me after shows and commenting on my red boots. I thought to myself, "I guess they must really stick out when I'm on stage." So I decided to make a song about it during that tour. People loved it so much they were giving me their business cards and asking me to call them as soon as I recorded it.

How many pairs of little red boots do you own?

I have just the one pair, but I wear them religiously. But I just played a showcase at SXSW that was sponsored by Frye Boots. They said they'd send me a pair of red boots, so I can't wait for that. If I had money, I'd probably buy 20 pairs.

Might you ever sell your own line of red boots at your concerts?

In the past, you've talked about how your father was a bass player in a Latino band, and how he taught you guitar when you were 16. Which of your songs on this album is his favorite?

Well, he says he loves them all, but he's a bit biased! I think he likes the "Jimmy Dean" song a lot because there's a bit of a rhythmic Spanish guitar element in the chorus. And he's also said he loves "Black Fly" and "Dying of Another Broken Heart."

What inspired the song "Jimmy Dean"?

Most of my songs are taken from my personal experiences and perspectives, but I wanted to tackle writing a song from a completely different angle. I got inspired after reading James Dean's biography, so I wrote a song from the perspective of his ghost.

What's really funny with that song is that some people think I'm talking about the sausage guy. When you listen to the song, you realize it's James Dean, but it's amusing to me that some people assume I have a fetish for Jimmy Dean sausages.

You recently performed in Mexico. Given that your background is both Mexican and Irish, have you ever played in Ireland?

Yes, I did a couple shows as a backing singer for Brandon Flowers in Dublin. When I was much younger—well it wasn't really a show, but I got up with a guitar and sang an Irish folk song in a bar. I haven't played a solo show in Ireland, but I hope to someday.

So many of the songs on this album come from a really personal place. Are you ever surprised by how well people can relate to the lyrics?

I realize that feelings of loneliness and anything to do with matters of the heart are universal, so I understand how people relate when I write about that. But it's always very cool when people pick out certain phrases or things I've said in songs and say, "It's like you were writing about me!" When you hear something like that, you don't feel so alone in your own little plight.

I love that you did the music video for "Angels" on your iPhone. Might you ever do another iPhone music video?

I hope so. I have so many ideas. There's this one app that applies the Rotoscope effect. That's what they used in the film A Scanner Darkly. It has a cartoonish vibe and I'd love to use that in a future video.

Where did you shoot the video for "Little Lie"?

That was a lot of fun. We shot it in a barn that had been converted into a recording studio. We got to drive out into the country, and we decorated the studio with stuff from my apartment. I'm really into birds and Día de los Muertos (Day of the Dead) imagery, so you can definitely see that in the video.

Speaking of birds, it looks like you have a bird tattoo…

I do, and I want to get another one!

How many tattoos do you have, and what are they?

Five, and they're all black. I have a phoenix on my wrist, the lyrics "Bird on a wire" on my other wrist. I got that one because it's one of my favorite Leonard Cohen songs, and also because I'm into birds. I have a star on my hip and a Chinese symbol on my ankle and some vines—a tribal thing—on my back.

When did your affinity for birds start?

I recall saving a lot of birds when I was a kid. Sometimes we'd find them in our backyard or they'd come into our chimney and end up in our fireplace. I'd rescue them and set them free.

But it didn't come into play as much until I got a bird. I have a Green-cheeked Conure at home, and that led me to learn more about them.

I actually held a benefit concert for this place called the World Parrot Refuge in Coombs, British Columbia. I'm a big supporter of what they do and I hope to visit the refuge one day soon.

You also paint and create jewelry. Do you get much time to do that now that you're touring so much?

Not as much time as I'd like. Painting is one of my favorite things to do. It's all Día de los Muertos and Frida Kahlo-inspired stuff.

I've tried doing other things, but skeletons seem to be what I'm good at for whatever reason. Sometimes I get commissioned to do them. People will send me a picture and ask, "Will you do a skeleton in the likeness of my girlfriend? I want to give it to her for her birthday." I think I like those best, because it's a great challenge.

And you did the artwork on the Little Red Boots album as well?

I did the bird skull on the inside of the album. I wanted my Mexican roots to show a little bit in the artwork and the imagery.

Will this album be released on vinyl? It'd be great to see the artwork in a larger format.

Yeah, absolutely. I don't know if it's going to be available everywhere, but I'm hoping it will be. I think the old-school vibe of the album would be a good fit for vinyl.

A YouTube search yields some fantastic cover songs you've done over the years. What are some of your favorites?

I love doing covers. Some of my favorites are Leonard Cohen songs. And I really like doing the Hank Williams version of "I'm So Lonesome I Could Cry" and Bruce Springsteen's "I'm on Fire."

Have you ever played the Hotel Cafe before?

I was doing a run with Noah and the Whale, and on one of our days off, I played a solo set there. This will be my first time playing there with a full band, which I'm really excited about. It's a cool venue.

What are some of your favorite things to do when you come to LA?

Eating at the Stinking Rose. I love garlic!

I also like to go to Venice Beach. I'm a big fan of picking up little trinkets. They have a lot of Mexican stuff—shadow boxes and painted skeleton heads made out of glass. I pick up odds and ends, plus fun little jewelry things. I enjoy filling my home with items that other people make, and you never know what you're going to find at Venice Beach!

Thanks for speaking with LAist, Lindi!