Escape Your Comfort Zone: "The Escort" at the Geffen Playhouse 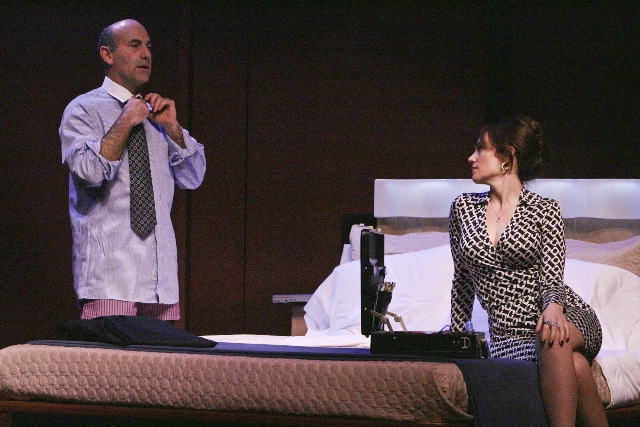 In a cosmopolitan city such as Los Angeles, we like to think of ourselves as open-minded. More importantly, we want people we interact with to perceive us as liberal and accepting. Despite this desire, every person has a limit to what they consider to be acceptable and proper behavior. The Escort at the Geffen Playhouse brilliantly explores the limits of what we find progressive and safe, and the reality of what happens when we stray too far out of our comfort zone.

In the world premiere of playwright Jane Anderson’s newest drama, we meet Dr. Rhona Bloom, a single-mother who is in a bit of a rut. She strives to be a good doctor and mother, even maintaining a cordial relationship with her ex-husband, but this leaves little time for her own needs. We quickly realize that her world is about to change when she meets Charlotte, a high-class call girl that surprises Rhona with her intellect and poise. After the two attempt an unlikely friendship, we see Rhona escape from her routine with a series of choices that oscillate between healthy self-development and perilous risks.

Although the play delves into the realm of taboo, director Lisa Peterson avoids cheap shocks (and unnecessary distractions) by employing body suits for nude scenes. The play may lack titillating nudity (which might disappoint fans of actress Maggie Siff, who plays Charlotte but will be recognizable to Mad Men fans as Rachel Menken), but the humor and frankness with which Anderson explores the universal themes of friendship, parenting in the digital age, and sexual morality is enough to arouse the most desensitized audience.

Although the Geffen audience tends to skew a bit older, this is a must-see play for theatre-goers of any age that are seeking a play that excites as well as challenges our own perceptions. While Maggie Siff as Charlotte, James Eckhouse as Rhona’s ex-husband Howard, and Gabriel Sunday who doubles up as both Rhona’s son Lewis and male escort Lewis, all give excellent scene-stealing performances, Polly Draper really comes into the role of Rhona in the second-half.

The second act does go into some unexpected directions where the play’s themes become a bit muddled, but it does lend itself to further debate and self-exploration. Exceptional acting, smart and witty dialogue, and complex themes guarantee that you’ll be deep in conversation about The Escort before you exit the Geffen’s courtyard.

The Escort runs through May 8th at the Geffen Playhouse.
Tickets available online from $45-75. Tickets are also available for $24.50-$39.50 on goldstar.