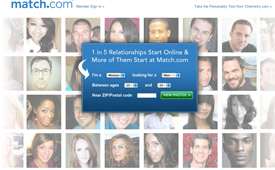 The match.com homepage as it looks today.
A woman filed an anonymous civil lawsuit in LA Superior Court Wednesday asking that Match.com cease new registrations until the online dating site has a system in place to screen new signups and exclude registered sex offenders from its membership.

The woman, an Ivy League graduate who works in film and television, according to her attorney Mark L. Webb, was the victim of an alleged sexual attack after meeting a man she had met via Match.com for a second date. After leaving Urth Cafe on Melrose, however, he allegedly followed her home and "forced himself on her," according to Webb.

The alleged victim later went online to discover that the man, named in the lawsuit as Alan Paul Wurtzel, had previously been convicted on at least six counts of sexual battery.

"This horrific ordeal completely blindsided me because I had considered myself savvy about online dating safety," the woman said in a statement released through Webb last week.

"Things quickly turned into a nightmare, beyond my control."

Match.com, owned by IAC/InterActiveCorp, has been one of the most active online dating sites since launching in 1995.

Match.com representatives told KABC last week that the site has readily available safety tips and does warn members that they're on their own in regard to screening potential dates.

Is that enough? Should online dating sites be more active in screening new (and active) members? Should users be expected to at least Google prospective dates on their own (if not search the database)?