The plastic cameras at the Lomography store in West Hollywood may look innocent, but spend a little time with one and it may quickly become an obsession.

The store's origins can be traced back to 1991, when some students in Vienna discovered a "small, enigmatic Russian camera" called the LC-A. They couldn't believe how great their photos turned out, and suddenly all their friends wanted one. This camera appreciation society soon grew into a camera company that has created new versions of lightweight plastic cameras from the 60s, 70s and 80s. Enthusiasts enjoy playing with options such double exposures, half-frames, vignetting and scores of film choices.

The largest Lomography store in the world is based in West Hollywood, and this Friday night will be the opening reception for Lomography LA's 10 Prophecies of the Analogue Future competition. LAist caught up with shop manager/professional photographer Lindsay Hutchens last week to learn more.

LAist: For those unfamiliar with the store and the cameras, how would you describe Lomography?

Lindsay Hutchens: Lomography is an analog camera company, and it's meant to bring creative photography to the masses. It has to do with staying in the moment, being intuitive with your shooting, and also being able to surprise yourself when you pick up your film. In an age of immediacy, it's nice to have some anticipation again.

What's the history behind the building that houses Lomography LA?

Given that a Russian camera gave impetus to this entire company, the history of this building was a sign that it was meant to be!

Since the store opened a year ago in February, how has the LA branch of the Lomography community evolved?

A lot of people who came into the shop when we first opened were people who were already into Lomography. They loved the cameras, and they were just excited to have something in their own city.

What I really like about the growth of it is there have been people who have fallen in love with Lomography in this store. It's a form of expression and you get to see it become a part of someone's life. Not everyone is aware that they can be creative, and it's amazing to see that blossom.

In addition to camera classes, the store often hosts field trips. Have you discovered any "hidden gems" of LA during these excursions?

I wouldn't say they're hidden. What's funny is we've sort of made it a point to visit icons of LA every so often. It seems that many people in LA—perhaps more than any other city—don't often visit the things this city is known for.

We've visited places like the Griffith Observatory, the La Brea Tar Pits, the Santa Monica Pier and the boardwalk in Venice. Next on our list is a scavenger hunt at the LA Zoo at the end of this month.

Last fall, you hosted the Diana World Tour. What was that like?

It was a huge undertaking—definitely the biggest thing we've done yet. The Diana is based on a camera that was originally manufactured in the 60s and 70s, and this event showcased the cameras of a man who had amassed this huge collection of originals and clones.

To make the event unique, we had artists, celebrities and other creative people do customizations on Diana cameras. Others contributed photographs they'd taken on a Diana.

It was a great way to raise money for worthy causes. We let each artist choose a charity they were passionate about, and a lot of that money went to local charities, which was great.

Who were some of the participating celebrities?

Seth Rogen took a photo just for us—he's a regular customer and he's really into photography.

Matt Sharp (Weezer's original bassist) of the Rentals also gave us a photo. He has this amazing project called Songs About Time, featuring photographs about days and films about weeks. 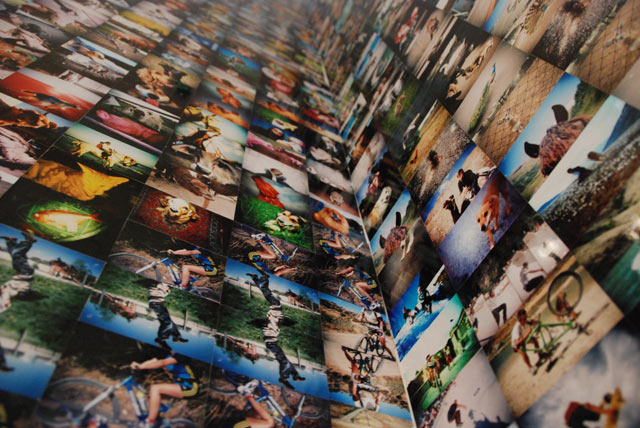 One of the "LomoWalls" at Lomography LA.

If someone's new to Lomography, which two cameras do you recommend they check out?

I think it's a toss-up between the Diana F+ and the LC-A+ for those just getting started. Both of them allow for a lot of growth. Diana's going to provide more of a softer focus, and it's a little more controllable because you can change your lighting settings. You can do long nighttime exposures and even pinhole shots.

The LC-A+ is wonderful for beginners because it has the light meter built in. If you're looking for more consistency, it definitely has that. The focus is not going to be as soft as some of the other cameras, because it has a glass lens, but the body's made out of plastic so it's still lightweight and easy to use.

Lomography International has been hosting a worldwide 10 Prophecies of the Analogue Future competition. What led you to create a locals-only version?

We have a lot of people who come into the store a regular basis, and we wanted to have an exhibition showcasing their work. I was amazed by what LA had to offer, and for many people, this will be the first time they've seen their work displayed large on a wall.

What's one of the most creative entries you received?

We had a band called Crystal Antlers play at our one-year anniversary party. One Lomography regular did this multiple exposure of a manual panorama with his Diana camera. It's three frames long and it's layered using different colored flashes. He built this masterpiece in the photograph in the camera. No Photoshop needed.

Is it true you'll be featuring some new cameras at the event to raise money for the relief efforts in Japan?

Yes, it's called "Lomography Loves Japan" and they're special clones of the Diana F+, the Diana Mini and the Fisheye 2, with $20 per camera going toward the relief efforts.

These cameras were originally created for Golden Week in Japan, which focuses on slowing things down, looking at things in a different way and appreciating life.

After the earthquake and the tsunami, Lomography changed the direction of these products. They're donating 20,000 Euros to the Red Cross relief efforts in Japan, and hopefully raising some awareness. And when I say awareness—I know everyone's aware that it happened, but people sometimes forget that it becomes an ongoing need.

What can people expect at Friday's opening reception?

We're going to focus on the photographs. We've got 10 images, each depicting a different prophecy. And in sticking with the prophecy theme, we'll also have some custom LA fortune cookies by Anna Laurent, and tarot card readings by Madame Pamita. There'll also be a DJ, raffles, catered food, an open bar and lots of people taking pictures!

Thanks for speaking with LAist, Lindsay! Attend Lomography LA's 10 Prophecies of the Analogue Future reception this Friday, April 15, from 6-10 p.m. at 7998 Santa Monica Blvd. in West Hollywood.