'A Winter Tale' in Spring: Singer/Songwriter Bobby Long to Play McCabe's This Friday

Don't let the title of Bobby Long's album fool you. A Winter Tale features music you'll want to listen to in every season.

Although this British singer/songwriter didn't pick up a guitar until the age of 17, he's spent the last seven years honing his craft. In 2009 alone, he played 160 shows in seven months in seven countries. That dedication paid off, and Long's music has something for everyone. His fingerpicking guitar skills are undeniable, his poetic lyrics make you want to follow along with the printed words as he sings, and his melodies are ripe with the intrinsic familiarity of a well-written song.

Long followed in the footsteps of some of his heroes—many of whom he's been compared with in recent months—and recorded his album with a live band. And rather than going digital, he used the vintage recording equipment in music producer Liam Watson’s studio (where the White Stripes recorded Elephant) to capture these 11 tracks. LAist caught up with Long last week to chat about Mellotrons, McCabe's and the life of a touring musician.

LAist: How did the recording process at producer Liam Watson's ToeRag Studios impact the final record?

Bobby Long: I think that gave the record its rawness. It's got a very natural feel because when you choose to record live, it's a very human and very flawed way of recording. You never know when you're going to hit a bum note or come in late…

I think I want to record this way for the rest of my life. Playing music in a room with a bunch of guys is fun and it's a whole other art form—and hopefully not a dying art form. There's a real feeling of community, and as soon as you nail it, everyone's excited because you've captured a moment.

Bobby Long - "Who Have You Been Loving"

Did you discover any new instruments or recording techniques in the studio?

A whole bunch! The equipment in there is from the 60s or earlier. There was this rare EMI REDD 17 valve desk from Abbey Road. There was a reverb box upstairs in the attic. There were these huge compressors—not something you could drag onto a computer, that's for sure. There was no computer in the studio at all.

I learned a whole lot and we recorded using a ton of old amps and guitars. We also used this thing called the Mellotron, which was great. It's an incredible instrument, but very hard to play because you can't hold down a sustained note for every long. It changes how you play and you always discover something new.

The song "A Passing Tale" pairs hopeful music with lyrics that reflect a difficult situation. What was the songwriting process like for that song? It's quite an engaging juxtaposition…

Deep down, I think that song is about someone finding their way out a bad situation rather than being stuck in the middle. It's a realization of "this is the worst it's going to get," and I hope the music reveals that.

Speaking of juxtaposition, in songs like "The Borough Mill" (a b-side) I like how it sounds like an old country song, but I'm actually singing about the town I come from or something else in the modern day. That's the kind of contrast I really enjoy—recording these old-sounding songs with old techniques, but incorporating modern lyrics.

At what point in the songwriting process did you know you wanted to make "Being a Mockingbird" a waltz?

I think waltzes are beautiful, so I think I knew that early on. I love the jumpy yet controlled tempo of a waltz, and I like the idea of a girl in a nice dress swaying to it.

One of my favorite songs is "Waltz #2" by Elliott Smith, and I'm sure that song inspired the beat of this one—sort of a snare roll.

"Penance Man Blues" is so full of energy. Did you write that one on the road—perhaps when you were touring the South a while back?

I wrote that one before my travels. That song first fell out on the page, then I put it to music. It's a fairly simple song and it's in D all the way through—but I liked how it turned into this continuous thing with a train beat and a flurry of words.

Is that song really fun to play when you have the full band with you on tour?

Yeah, absolutely, though sometimes it's tough when you don't reach the highs of the previous time you played it. But I guess that's the same with every song. It's definitely a lot of fun to play! 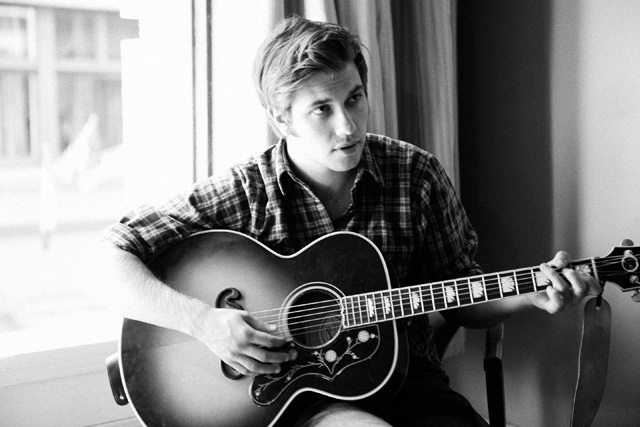 Your lyrics have a great poetic sensibility about them. As you were growing up, did you get most of your poetry from books or from songs?

Who are your favorite poets?

I like a whole bunch of people: Dylan Thomas, Billy Childish, John Cooper Clarke, plus stuff like Keats and John Donne. There's a whole bunch. I try to grab from everywhere, really.

Given the stories you tell in songs such as "Two Years Old", might you ever pen a full-length novel?

Maybe. I'm actually working on a poetry book that will be released later this year, so that's one of my passions at the moment. One day I'd love to release a novel, though I don't feel I'm up to that level yet. I think I want to do a few more albums and a few more poetry books before I delve into that.

What book are you reading now?

I'm going through a Conan Doyle phase, so I'm reading a lot of Sherlock Holmes.

You've talked in the past about how at one point you tried to write a new song every Saturday night. How has touring nonstop changed your writing process? Are you still as disciplined on the road?

It's certainly tough. The reason I'm doing this poetry thing is because we're in a van all day and songwriting in that environment is a struggle. The songwriting thing is a lot easier to do as soon as you get home.

It seems you've been touring nonstop for years. What do you most enjoy about it?

A good crowd can really make my day. When you're touring, every day is great—but because of the travel, it's also very similar. The only thing that's different is the show, and that's the only thing you care about.

Take now, for instance. We've been in a van for eight hours already and we've got two more to go. What we're looking forward to is letting loose on stage tonight. We're just happy to get up and play!

You wrote your university thesis on "The Social Impact of American Folk Music". Would you share one singer or album you'd recommend that more people need to hear?

This wasn't through the thesis, but I really love Ramblin' Jack Elliott a lot. For me he's the middle ground between, say, Woody Guthrie and Bob Dylan.

Given that there's "winter" in the title of this album and a mention of "autumn" in "Dead and Gone", might your next album focus on spring and summer?

Possibly! I'm still at the stage where I'm writing the second album, so there's not really a theme yet. Once I have time to take a couple weeks off and really go for it, I'll probably find something. I think the next one's going to be a heavier album and involve electric guitars and stuff. I can't wait. But I do think it will sound a bit happier—more like spring or autumn.

Have you ever played McCabe's before? Is it the ideal venue for a fingerpicking guitar player/singer/songwriter given that you're surrounded by guitars?

I'm sure it will be. I haven't played there before but I'm really looking forward to it. I'm well aware of the history of the place!

Plus it's always good to be in California. Nice weather and all that.

What are some of your favorite things to do when you're in LA?

I like visiting Amoeba. And I like just hanging out with my friends. I've got one friend who lets me hang out in her swimming pool all day. Being English, I never got to do that when I was growing up!

Thanks for speaking with LAist, Bobby!