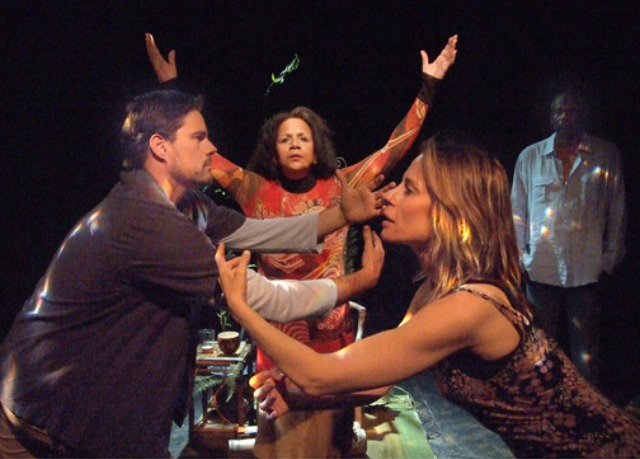 DaddyO Dies Well, Murray Mednick's fifth play from his "Gary Plays" series, is currently running at Electric Lodge in Venice. Drawing on references from previous Gary Plays, the production takes the audience through the pre-mortem hallucinations and memories of DaddyO, an old hipster patriarch, while simultaneously guiding Gary through a family ayahuasca rite of passage. Those unfamiliar with previous works from the Gary series should have no difficulty grasping references, but the trippy stage action will leave all viewers with a "I don't know what just happened to me, but I know I liked it" sensation. With both script and direction by Mednick, DaddyO Dies Well is a fun, wonderfully strange, and well-executed production.

Hugh Dane leads the cast with his extraordinary portrayal of DaddyO, giving what is surely one of the best stage presentations in Los Angeles this year. Dane gives a soulful and transportive performance that is rich with warmth and refined attention to detail. Dane's performance is nestled within a capable, comfortable, and flawless supporting cast. Standouts Casey Sullivan and Jack Kehler give tender definition to their characters. Sullivan's Gary role requires that he jump from being fluidly graceful to amusingly gross with regular frequency, but Sullivan does so with impressive ease. Kehler's rendering of Dr. Jones is charming with excellent comedic timing.

Mednick's direction is satisfying, detailed, and beautifully choreographed with subtle Greek chorus interjections that add depth to the story. In a quirky, but brilliant sound design twist, the actors use their own voices, whispers, soft whistles, and tongue clicks to create the distinctive sounds of a rain forest. Careful attention is given to tastefully injected atmospheric lighting (by Dan Reed) and multi-media design. These special effects are especially gratifying as the Electric Lodge's is the only fully solar and wind powered venue in Los Angeles.