Radiation Detected from Japan is About as Threatening as a Banana 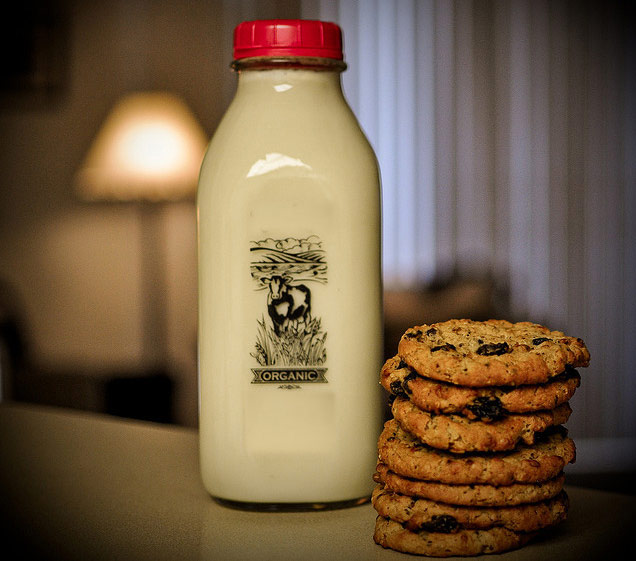 In this photo (by R. E. ~ via LAist Featured Photo Pool), non-radioactive milk is paired with non-atomic cookies.

There's radiation in our milk!!! But unlike earlier this month the media is declaring it unquestionably non-threatening, as opposed to shocking viewers to induce vomiting and feverishly turn to adult breastfeeding in fallout shelters. The fact is, there's always radiation... everywhere. Likely more so if you take your milk from a paper or plastic carton rather than one of those fancy glass bottles.

The news is this: Trace levels (i.e. barely detectable) of radiation that originated from the Fukushima nuclear reactor leaks in Japan was found in milk sold in San Luis Obispo County by state health officials. Yes, the radiation that left the island nation of Japan two weeks ago and disappeared into the jet stream has found it's way into the cow that made the milk we had with our Corn Flakes this morning. The measurements came out to 0.8 pico curies per literlevel of iodine-131, according to the WSJ, or less than 1/5000th the amount that regulated by USDA health standards.

The California Department of Public Health has been waiting around for the radioactive Iodine-131 to make its way into the food supply and that day has come. But the radiation levels found in the SLO County Milk (along with milk tested in Spokane, WA) are so minute it's otherwise not worth mentioning. The milk in question was tested Monday and in response to the natural reaction of most people to innately freak out when the words "radioactive" and "milk" are paired in the same sentence, CDPH issued an updated, robotic-reading radiation FAQ stating (to paraphrase): NO THREAT WHATSOEVER.

Closer to the Fukushima Daiichi power plant in Japan it remains a very serious and uncertain situation, with radioactive iodine levels in the water at the plant spiking to levels as high as 10,000 times permissible limits, according to the latest LATimes report. A ban on fishing in the region may affect the market for octopi and marine-based food products popular in Los Angeles, reports KNX.

To put these radiation levels in perspective, check out the brilliant chart below posted by David McCandless of InformationIsBeautiful.net. And then let's eat a banana, shall we?

Chart by David McCandless, InformationIsBeautiful.net. A hi-res PDF is available here (for a $2.50 donation going to Japan Crisis Relief).