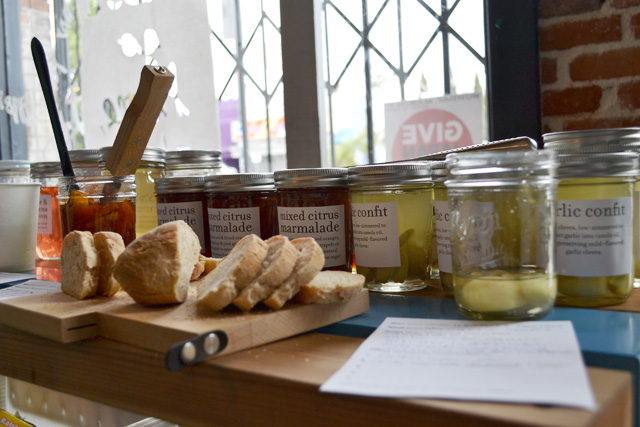 My spread at the LA food swap (Heather Parlato/LAist)

You know what this town needs? A good, old-fashioned community food swap! At least, that's what my friend, Emily Ho, thought when she read about other organized food swaps around the country and decided to set one up here in LA. The inaugural swap took place Sunday, March 27, 2011, but if you missed out this time, the LA Food Swap is open to all participants willing to make homemade goodies to trade (space permitting), so sign up to find out about the next one. 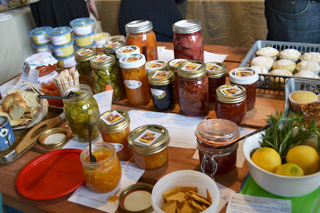 A table of jams, lemon curd & lemon rosemary cupcakes at the LA food swap (Heather Parlato/LAist)
I got all ready for the swap by preparing some seasonal pantry foods, including the slow cooked chunky marmalade from our Seasonal Eats on oranges, mixing it up with a few varieties of orange, Meyer lemons and pink grapefruit. I also made a big batch of Thomas Keller's garlic confit preparation, as well as 2 vodka infusions: dandelion and blood orange with lemon verbena.

How it works: You sign up with the organizers, prepare the foods you plan to offer, bring them to the swap, and set each one up with a silent auction sheet where others who want your item can write their name and what they're offering to trade in kind. Once all the offers are in, participants are able to swap items, or if their products are in short number, they may negotiate until they reach mutually beneficial agreements all around. 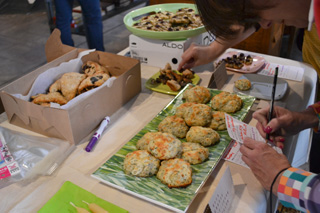 Fantastic 4 cheese & artichoke biscuits at the LA food swap (Heather Parlato/LAist)
Here are the things I learned. First, it's totally exciting to make a big batch of 1 or 2 things and end up with a huge variety of homemade foods! Really, it's like going to a party where it's everyone's birthday. Second, the more unique, the more desirable. I thought maybe my mixed citrus marmalade would be a bit different, and while it was the only one of its kind, there was every walk of marmalade available. Nobody had garlic confit, though, and similarly, the items that were unique to me really piqued my interest, so my note-to-self for next time is to come up with more unexpected treats. Third, put your twitter, email, or other contact info on your labels (or bring cards). i met some great friends, reconnected with someone from high-school, and got to hang out with some awesome food-lovers, so contact info is a great way to keep it going.

Another thing I learned is that anyone who thinks LA is lacking in community just isn't trying to create it. Everyone at the swap was so nice, gracious, and excited to explain what they made, share ideas, and encourage each other. Some of us are friends and neighbors, but in large part we all met new people doing the same thing (quietly railing against conventional food systems—hey, it's fun). The energy of the people really made the event, and the follow-up tweets of how everyone is enjoying the garlic bread, the satsuma mandarin powder, the lemon blueberry jam, the ginger sprout salad (need I go on?) have been great to read. 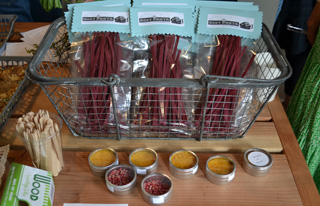 Emily's beet fettucine, Satsuma mandarin powder, and pink peppercorns at the LA food swap (Heather Parlato/LAist)
From what I hear, it sounds like the food swap will happen quarterly for the time being, so if you want to get in on the next one, sign up for email alerts on the site or follow them on facebook or twitter. This meetup was held at Reform School in Silver Lake from 10am to noon, and I'd expect subsequent meetings to have a similar setup. For more pictures, check the official write-up on the LA food swap site. Our fearless organizer, Emily Ho, is a writer and consultant for sustainable food entrepreneurs (her work frequently appears on The Kitchn, which I link to whenever i can in Seasonal Eats). In the meantime, keep cooking, foraging and preserving and join us for the next round!