Rebels With Applause: 'Offending the Audience' at Velaslavasay Panorama 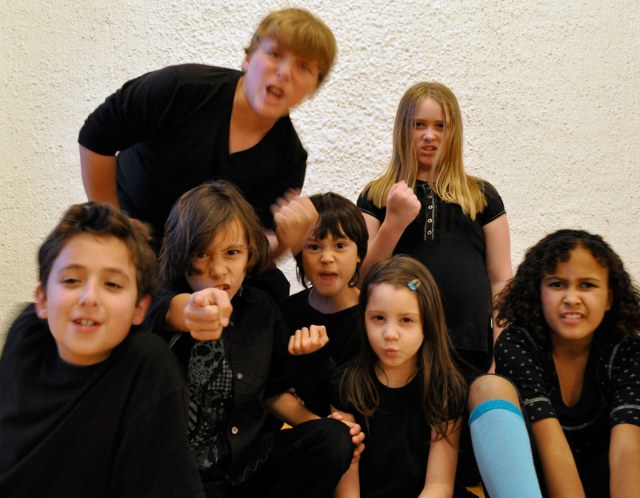 The cast of 'Offending the Audience.' (Photo by Mackenzie Hoffman courtesy of Emily Mast.)

Peter Handke's cerebral anti-play Offending the Audience has a short run this weekend at Velaslavasay Panorama. This staged meta-narrative of consciousness raising interjections is an experimental theatre piece that aims to be as untheatrical as possible while transforming the audience into a self-conscious spectacle to be observed and judged by the performers on stage. Handke's work has been performed for decades throughout the world, but this particular production is unique in that the cast is pulled from the ranks of elementary school, some appearing to be as young as five years old. This production of Offending the Audience is almost like watching Kids Say the Darndest Things for the philosophically-inclined academic set.

Under the direction of Emily Mast, Offending the Audience is humorous, refreshing, inventively cast, and delightfully disconcerting. The novel use of child actors adds another dimension of norm-breaking, furthering the theatre experiment. The minimalist, barren set essentially forces the performers to fulfill active speaking roles and to be anti-play context in and of themselves as they twiddle thumbs and whisper secrets to each other in the background. Mast's decision to use the under-appreciated Velaslavasay Panorama as a venue is an excellent one that gives this performance art piece an air of pioneering uniqueness. Their arctic environment 360 degree panorama is situated like a birds nest above the theatre. Climb the dimly blue-lit spiral staircase — stepping into their three dimensional painting is a cool added bonus to seeing the show.

The twisted gaggle of children performing in the show includes Zane Amundsen, Amber Barbell, Mathew Davis, Bailey Garcia, Kaitlin Morgan, Gerald Orzikh, and Talyan Wright. The children are funny, capable, and really freaking adorable as they spurt out some very adult dialogue and insults at the audience. Each child's inherent personality comes through their lines giving some richness to the show.

Offending the Audience is playing through Sunday, March 27. Tickets can be obtained online through Emily Mast.