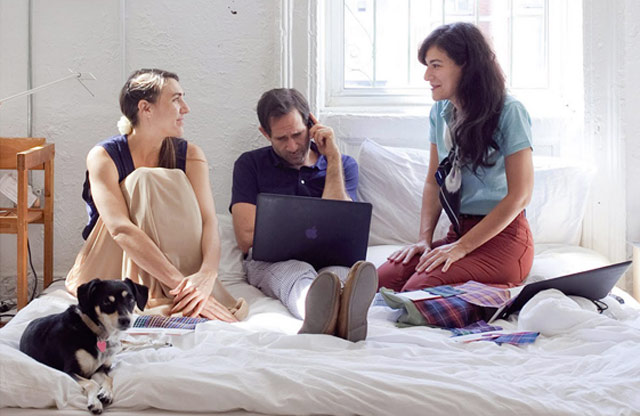 American Apparel CEO Dov Charney was hit with a fresh round of sexual assault allegations in a lawsuit filed Wednesday in L.A. County Superior Court.

The suit was filed by former American Apparel employee Kimbra Lo and three other women. In the complaint, Lo claimed that after Charney invited her to his bedroom to talk about a job. When she arrived, he appeared dressed only in a towel, undressed her and tried to have sex. Lo claims she tried to resist but was afraid and that Charney tried to take photographs.

The three other plaintiffs named in the Lo lawsuit, Alyssa Ferguson, Marissa Wilson and Tesa Lubans-Dehaven, declined to publicly disclose the details of their complaint, according to the NY Times.

American Apparel argues that the charges are bullshit. The company claimed in a memo that Lo pursued a relationship with Charney after leaving the company and that they have "smoking gun" photos to prove his innocence.

CHARNEY suddenly grabbed her again and violently kissed her. Ms. Lo pushed him away and wamed CHARNEY again that his actions were unwanted and offensive. He responded by asking: "Do you know how long I have been waiting for this?" CHARNEY's tone made it clear to Ms. Lo that CHARNEY was not prepared to wait any longer regardless of her wishes and would become violent if she resisted in any way. He then forced her to perform various sexual acts. He became more aggressive and violent whenever Ms. Lo made any effort to resist.

“I think all of these claims are contrived,” said Charney's lawyer Peter Schey, according to the New York Times. “The allegations are false. I think this is an effort to shake down American Apparel. These claims should be resolved in confidential arbitration.”

Eric Baum, the lawyer representing the plaintiffs in both lawsuits, disagreed: "The claims are legitimate and valid," he said in an interview Thursday, according to the LA Times. "Just because the company has a sexually charged ad campaign and environment, does not give its CEO Dov Charney a license to sexually abuse, harass and assault its employees."