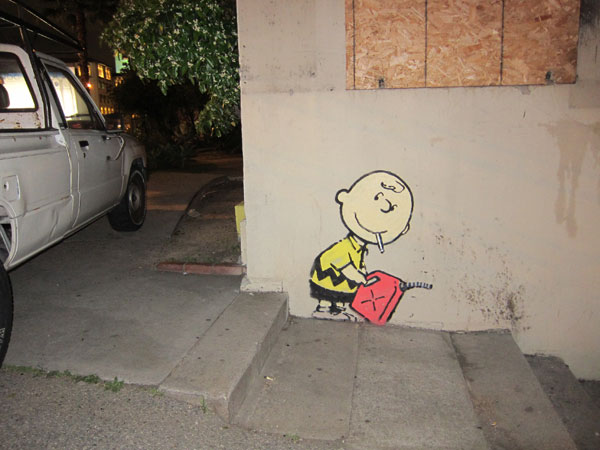 Charlie Brown Firestarter (Photo via The Dirt Floor/Used with permission)

The elusive UK street artist Banksy didn't exact slip into Los Angeles last month unnoticed. His high profile and controversial art work popped up all over town, and the stories about the pieces being removed are still being discussed. One website, AllVoices.com, has issued an open letter to The Los Angeles Community regarding Banksy's "stolen art."

Among the "missing" or "stolen" pieces is the Charlie Brown Firestarter, which appeared on a burned out building in Hollywood, points out TMZ.

AllVoices believes that Banksy's artwork is a gift to the communities in which it is left, and says that they are willing to buy the missing pieces back. Their letters explains:

[I]n an effort to support the arts and the cultural value provided when talented individuals like Banksy take it upon themselves to give such art to a community, Allvoices is offering to purchase these stolen pieces and subsequently put them on public display so that the world can enjoy these creations.

In the Palisades, however, one of Banky's creations has stirred controversy. The words "This Looks a Bit Like an Elephant" were put by the artist on a beige tank, which served as the proverbial final straw in getting the tank removed, something some locals had been pushing to achieve for some time. However, the tank was also the "home" of Tachowa Covington aka Rollerball, who had lived inside the tank for about 7 years, and says he saw Banksy adorning the outside with his message.

Meanwhile, back in the UK, the Daily Mail has published a photo of "Mrs. Banksy," who they say married the artist (who they say is a man named Robin Gunningham) in Las Vegas in 2006. Joy Millward works as a parliamentary lobbyist, and was photographed while giving a work presentation.

The Daily Mail explains that the lengths the pair go to in order to not be known as Banksy and wife are extreme:

[S]ources close to the couple have revealed the lengths they go to in order to avoid attention.

One said: ‘Joy and Robin live in an isolated community and have little to do with even their closest neighbours.

‘Even those they occasionally speak to have no idea who they really are. The only people who know his real identity are those in the inner circle, who have been vetted.


AllVoices is hoping Banksy will speak up so that they can connect with him to aid in their effort to find and preserve his Los Angeles street art. They conclude their open letter:

Lastly, if you are Banksy, please get in touch with us so that we can provide you with a means of accessing our site so that you can easily post whatever messages you'd like to share with people that love, respect and appreciate your art.