Ann Coulter, Nuclear Physicist, Says Radiation is 'Good for You' 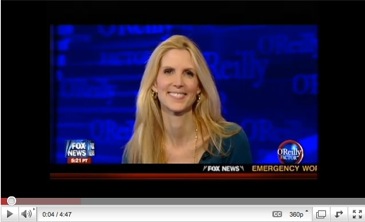 Hey, you guys out there who are worrying about a deadly mushroom cloud making its way across the Pacific — you can all just calm down, because we have it on good authority that radiation is good for you. What authority? None other than Ann "PhD" Coulter.

As people in Japan panic and workers risk their lives at the country's Fukushima Nuclear Plant, Coulter went ahead and published a column called "A Glowing Report on Radiation." It begins:

With the terrible earthquake and resulting tsunami that have devastated Japan, the only good news is that anyone exposed to excess radiation from the nuclear power plants is now probably much less likely to get cancer.

Coulter goes on to reference one article from the New York Times in 2001 which theorized — theorized — that a dose of radiation which is higher than what the government deems acceptable might "activate cells' natural defense mechanisms." She also cites a variety of examples of people deliberately exposing themselves to radiation, as if that proves anything besides the fact that lots of people do lots of crazy shit.

This is all a pretty clearly a case of Coulter finding something — anything! — to disagree with, for no apparent reason except self-promotion (I guess that worked). But this time, her ploy for attention is not only distasteful, it's dangerous, it's insulting to those exposed to real risk, and it even got her chastised by her frenemy Bill O'Reilly.

Coulter truly is a national treasure.

Meanwhile, on the homefront, Los Angeles County Health Officer Dr. Jonathan E. Fielding would like to remind you that you don't need to panic about radiation from the plant posing a threat to the health of Californians.

Remarks made by Fielding were released by the Department of Public Health today:

"We understand there is concern over the nuclear power complex situation in Japan, and we want to reassure everyone that multiple agencies at the local, state and federal levels are working together to monitor this situation out of an abundance of caution. Our position has not changed: we still do not expect to see an increase in harmful levels of radiation in California. We will continue to provide you with the latest, most accurate information possible."

In addition to keeping cool about the non-threat, the DPH reminds us to not gobble up potassium iodide (KI) tablets as a precautionary measure, and to get their info from reliable sources. To that effect, the California DPH has set up a hotline with information available in English and Spanish at (916) 341-3947. The Centers for Disease Control and Prevention (CDC) also has a hotline with information available 24/7 at (800) CDC-INFO (800-232-4636).