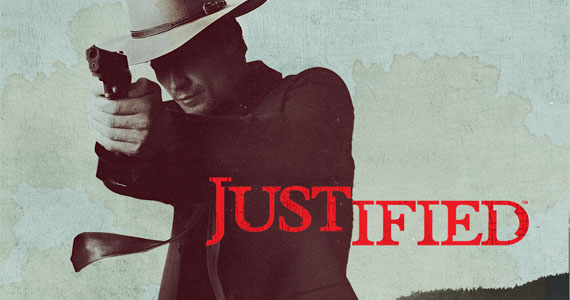 Timothy Olyphant plays Marshal Raylan Givens in FX's "Justified" which is on tonight at 10pm. Check out our brief conversation that we had with Olyphant in today's TV Junkie post.

Who watched the "Comedy Central Roast of Donald Trump" last night? Jeffrey Ross did a good job as host and Whitney Cummings was a highlight but we thought Snoop Dogg really came into some incredible kind of form. Watch for endless repeats of this on Comedy Central over the next several weeks. Our biggest hope is that last night was the death knell for The Situation's career as anything other than a reality show dope.
—-
The show we're most excited for tonight is "Justified," which has built up some incredible momentum. We urge you to catch up on this season if you haven't been paying attention. We'll be posting a conversation we had with series co-star Walton Goggins, aka Boyd Crowder, sometime over the next week but today we're sharing a brief conversation we had with series star Timothy Olyphant aka Marshal Raylan Givens a few weeks ago. "Justified" on FX at 10pm tonight.

The TV Junkie: So this year, as producer, do you get to introduce your own ideas and topics into the show?

Timothy Olyphant: No, I just don't get as many stares as I did when I was doing that last year.

Timothy Olyphant: We're getting to that.

The TV Junkie: Oh that's great news, because my shelves are lined with the products of Kentucky.

Timothy Olyphant: We've got moonshine in our opening. We're doing moonshine and we're drinking bourbon in the Marshal's office - what are you complain about?

The TV Junkie: Wasn't there a line you had, something like "I didn't order assholes with my bourbon."

The TV Junkie: Do you have a favorite bourbon? There are so many great, premium bourbons now.

Timothy Olyphant: No, I don't, I haven't found one yet, but I'm still looking.

The TV Junkie: You can get some bargains out there, you can get Bulleit at Trader Joe's for less than $20 and it's excellent, or you can spend quite a bit more on something really tasty like Black Maple Hill.

The TV Junkie: It's a great way to watch your show. Ten o'clock on a Wednesday, a tumbler with a couple cubes of ice and a good bourbon, and "Justified."

Timothy Olyphant: It sounds like you're doing your readers a favor.
---
"Late Night With Jimmy Fallon" has been great this week, particularly with Ted Danson's interview being done by flashlight last night, to conserve energy. Tonight, show favorite Amy Poehler will be on and later this week The Cars will reunite on the show! For additional perspective, be sure to watch our video interview with Jimmy Fallon at last week's PaleyFest2011.
---
Last week we went to Greg Proops free podcast session, "The Smartest Man In The World" and the show is now available. Next week Proops will bring the podcast back to Bar Lubitsch on Santa Monica Boulevard, and as usual it will be free, on Wednesday, March 30 at 8pm. You should go - it's a great time.
---
Speaking of podcasts, episode 14 of the Channel Zero podcast is up with our recollections of our experiences at last week's PaleyFest2011 and then some. Listen on the Channel Zero podcast page, and please subscribe on iTunes.
---
The TV Junkie Must-Watch Plan: "Attack of the Show," "Justified," "Late Show With David Letterman" (Actor Steve Martin; actress Selena Gomez), "Late Night With Jimmy Fallon" (Actress Amy Poehler; professional golfer Tiger Woods)

10:00pm Justified FX - Raylan is on the warpath to bring down a once-infamous bandit when Winona winds up the victim of a botched bank heist.

10:00pm Top Chef Bravo - The chefs cater an upscale lunch party; they must catch conch to cook with.