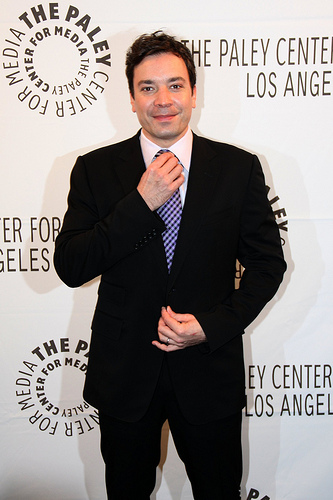 It was also great to catch up with Chris Hardwick, whom we've interviewed in the past, who was playing emcee/moderator/"interrogator" at the PaleyFest event. Hardwick's "Web Soup" will be returning to G4 on March 30th (8pm) and he is also embarking on a comedy tour later this month as well - find dates on Hardwick's website and/or follow him on Twitter at @Nerdist.

Hardwick did a superb job moderating the evening where the audience gained a lot of insight on Jimmy Fallon's path to host of "Late Night" as well as how the show gets put together. It's a daunting task to get 5 hours of TV up almost every week of the year - compare that to your favorite sitcom, which has about the same amount of staff at "Late Night," and only has to put up 1/2 a week for less than 1/3 of the year.

For more info on the remaining PaleyFest2011 schedule and tickets, go to the Paley Center for Media's website.
—-
Please note that we've returned to listing the TV shows of note for the evening below the TV Junkie Must-Watch Plan as we're done with nightly coverage of PaleyFest. Thanks for your patience and please let us know what more we can do to cover TV for you.
—-
The TV Junkie Plan: "Top Gear," "The Tonight Show With Jay Leno" (Jane Lynch; TV host Chris Matthews; Avril Lavigne performs), "Late Night With Jimmy Fallon" (TV-show host Tyra Banks; actor Holt McCallany; The Chieftains perform).

9:00pm The Chicago Code Fox - While searching for a drug supplier, Wysocki and Evers uncover an elaborate murder case; Teresa tries to get new radios for the department

9:00pm The Event NBC - President Martinez reasserts control after the attack in Alaska; Thomas drives Sophia and Martinez further apart; Michael leaves Leila with a friend and heads out to look for Thomas; the NSA works on decrypting a satellite transmission.

9:45pm Strangers on a Train TCM - (1951) A psychopath (Robert Walker) and a tennis player (Farley Granger) meet in a club car and plot that each will murder someone for the other.