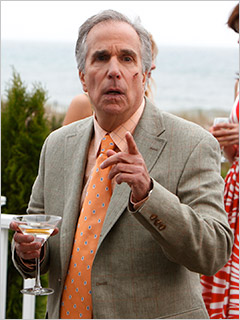 Henry Winkler plays Eddie R. Lawson in USA's "Royal Pains" which has just concluded its season.
For several weeks we've been living with day-to-day and now hourly updates of the slow motion train wreck that is the life of Charlie Sheen. The wreck started well over a decade ago with allegations of drug use and huge monthly bills for escort services. Combine that with the disappearance of cars that reappear crashed in canyons, restraining orders, alleged spousal abuse, drug possession, using pornstars as daycare providers, the list of allegations goes on and on. Initially the reason that there is so much interest in what Sheen has done isn't just its salaciousness, but the fact that he is(was) the highest paid actor on television with a viewing audience that would regularly reach the 8 figure mark.

We think back to our ever-increasingly distant past to focus on someone who was in a similar position, in terms of attention and limelight, and that person is Henry Winkler. For the better part of a decade, Henry Winkler was the most recognizable actor on TV playing a character who has been an icon ever since, Arthur "Fonzie" Fonzarelli. When "Happy Days" was the number one show on TV it had an audience of well over 20 million viewers - a staggering number that today's network executives can't even put their minds around. Winkler was on the cover of every magazine, from Dynamite! to People to you name it.

Winkler did all this and maintained a lifestyle untainted by scandal. Certainly there are a lot more media outlets following actors and celebrities these days, eager to endlessly report on rumors whether they are true are not, a practice that dates back to Hedda Hopper if not earlier. But what we wonder is if the public in the 1970s and 1980s would have tolerated the kind of behavior exhibited by Charlie Sheen. Communications majors, here's a thesis question: Why are advertisers still eager to associate their brands with CBS' "Two and a Half Men" but not MTV's "Skins"?

We're pretty confident in our assumption that advertisers of the '70s would have pulled their support for a show whose star has had as much legal trouble as Charlie Sheen has. If advertisers had pulled back their support for CBS a couple years ago, perhaps the situation wouldn't be as dire for Sheen as it is today. Imagine Henry Winkler strolling from the set of "Happy Days" to a limo filled with escorts off to a debauched night ending in (yet another) smashed up hotel room. Proctor & Gamble would have dropped that show in a second.

While the times may have changed, apparently for the worse, the persona that is Henry Winkler has stayed steady. After "Happy Days" Winkler was avidly involved in television as a producer and director but in the past decade he has experienced a renaissance of acting roles, many of them excellent, from "Arrested Development" to, currently, USA's "Royal Pains," which just ended its season last week, and the hilarious "Children's Hospital" on the Cartoon Network's Adult Swim. A few weeks ago we had the chance to sit down with Henry Winkler, someone we've been watching on TV since we were 5 years old, and have a conversation that was a dream come true for us. Winkler is a kind and generous man, enthusiastic about everything he's doing, whether it's writing books for kids or acting in yet another incredibly bizarre scene with Rob Corddry in "Children's Hospital" or flexing both his comedy and drama muscles in USA's "Royal Pains."

There's a reason why we'll continue to remember the Fonz and why we'll forget Charlie Harper and that has to do with the character of the men who have played those roles.

The TV Junkie: I'm a big fan of your work in "Royal Pains" but I wanted to ask you about "Children's Hospital."

Henry Winkler: Let me just tell you what happened yesterday: they found my "daughter." I'm taken to a diner, I'm introduced to my daughter, who is an African-American man, the father of Brian the surgeon, and I stood up and hugged "Samantha." I don't understand what I do, I just know that it's great.

The TV Junkie: I've been following Rob Corddry for a long time since his "Daily Show" days.

Henry WInkler: He's just genuinely smart and funny. His children were on the set yesterday with his beautiful wife. It really is a family affair. Everything [about him] looks so normal and then you read the script and you think, "Oh my God - check your wallet!"

The TV Junkie: What enticed you to get involved with that project?

Henry Winkler: Well, I love what I do. When you talk to somebody on the phone or you talk to somebody in person, and you think to yourself, "This just feels right." And that's what it was. So I'm literally living the needlepoint pillow [that says], "When it rains, it pours." I get to do that and then I get to be on this show ["Royal Pains"] which really is a gift from heaven. It's funny, it's a drama, I act with Mark [Feuerstein] and Paulo [Costanzo]. Unbelievable.

The TV Junkie: So you get to go to these extremes.

Henry Winkler: And then I have a book coming out this Father's Day. It's a book of my photographs I took while fly fishing for trout and then what I learned on the river. It's called "I Never Met An Idiot On The River."

The TV Junkie: What are some of your favorite places [to fly fish]?

Henry Winkler: Montana. Montana. Tennessee was good, Idaho was very good, Wyoming is good, but Montana is like heaven on earth.

The TV Junkie: How about cities that are a favorite of yours - what do you [think of LA, New York. other places]?

Henry Winkler: I went to school in Boston, and it's a great town. Boston is large enough to learn your independence and small enough to make your own. New Haven has one of the great pizzarias in the country, Pepe's. New York is where I was born and raised, it's where we shoot "Royal Pains" and it's where my grand-daughter lives so I'm in love with that place. My children were born here [Los Angeles], my wife is here, my house is here, my dogs are Californians.

The TV Junkie: Do your dogs have that California attitude?

Henry Winkler: They do, they're flakes.

Henry Winkler: Well, New York dogs are much more savvy. Mine just kind of hang out with a tennis ball - but there the dogs have brass knuckles on their paws.

The TV Junkie: Have you been doing any theater?

Henry Winkler: The last time I did theater was a year ago in England. For four years in a row I played Captain Hook in a thing called "The Pantomime" which is a Christmas extravaganza. They don't have that here, there is no "Pantomime," but that was magnificent, it was unbelievable.

The TV Junkie: I have to tell you it's been a dream to talk to you , someone that I've been watching on TV since I was a little kid.

Henry Winkler: It's been great, say hi to your kids for me.